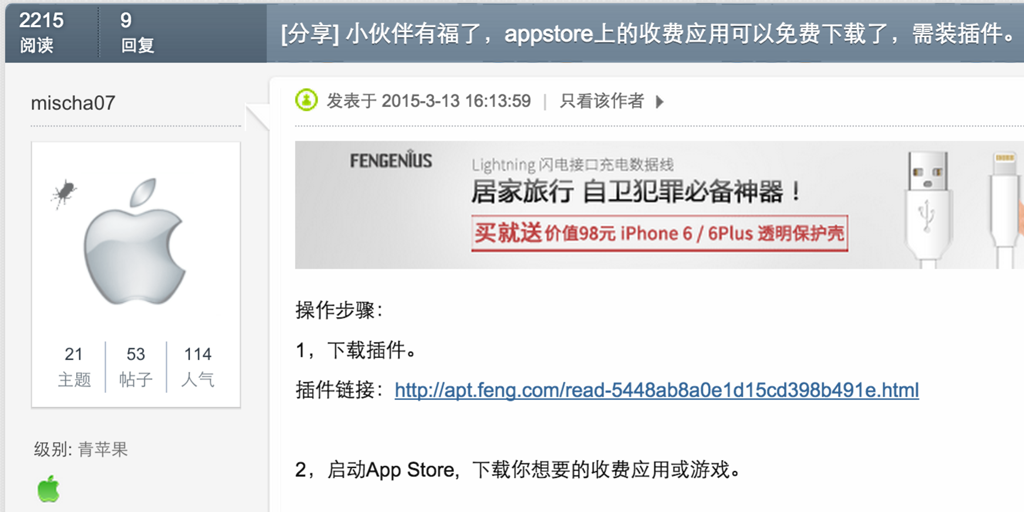 Researchers from Palo Alto Networks have discovered that a piece of iOS malware successfully stole more than 225,000 Apple IDs and passwords from jailbroken phones, using them to make purchases from the official App Store. The malware, dubbed KeyRaider, also has the ability to remotely lock jailbroken iOS devices in order to hold them to ransom.

These two tweaks will hijack app purchase requests, download stolen accounts or purchase receipts from the C2 server, then emulate the iTunes protocol to log in to Apple’s server and purchase apps or other items requested by users. The tweaks have been downloaded over 20,000 times, which suggests around 20,000 users are abusing the 225,000 stolen credentials.

However, it’s extremely unlikely that you’re at risk: the malware can only run on jailbroken devices, and appears to spread through only one set of Cydia repositories, run by Weiphone.

The malware was used in two tweaks that allow those running them to download paid apps and make in-app purchases from Apple’s official App Store without payment. The tweaks used the stolen credentials to make the purchases.

If you think your iPhone or iPad may be at risk, Palo Alto Networks has provided the following instructions to detect and remove the malware. Further details over at the company’s lengthy blog entry.

Users can use the following method to determine by themselves whether their iOS devices was infected:

If any dylib file contains any one of these strings, we urge users to delete it and delete the plist file with the same filename, then reboot the device.

We also suggest all affected users change their Apple account password after removing the malware, and enable two-factor verifications for Apple IDs.

The company also notes that not jailbreaking iOS devices is the only way to protect against such exploitation.