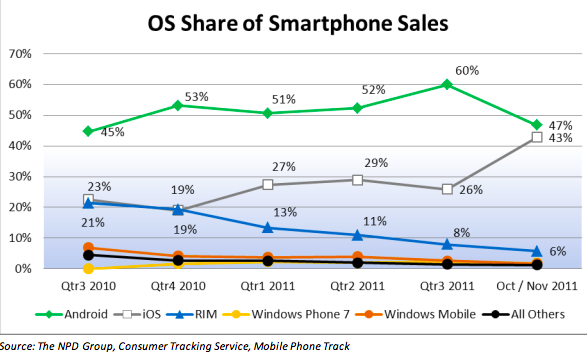 I think the Globe and Mail was the first to report that RIM’s beleaguered CEOs Jim Balsillie and Mike Lazaridis are out – moved upstairs to the boardroom.  The strangest thing about the story, and really the past few years, is the total denial by the leadership that Blackberry is in a death spiral.

Research In Motion Ltd.’s new chief executive officer says the company is doing everything right and does not need a change in strategy, and must instead focus on harnessing its talent to improve the BlackBerry and revive sales.

“It’s a fantastic growth story and it’s not coming to an end,” Mr. Heins said in an interview with The Globe and Mail. “What you will see with me is rigour and flawless execution.”

When asked whether he thought the appointment of Ms. Stymiest as chair and himself as CEO would be enough to satisfy investors, Mr. Heins retorted, “Change to what? Change for what?”

He continued, “I mean, what’s the objective of a change? We’ve made a lot of changes in the past 18 months. Not changes, but also evolution. I changed a lot of my management team, in hardware, software … I’ve trained a lot of other people in the last four years. What do you think I did? … We didn’t stand still in the last 18 months, we did our homework. And I think we will complete our homework soon.”

Even in appointing a current co-COO, who looks even less charismatic than either of the two people he replaces (video below), RIM is hedging its bets on Blackberry 10/QNX, which it won’t release until the end of 2012 on phones —if it bucks recent trends and ships on time.  Heins joined RIM just as the iPhone was released in 2007, and he has seen the company’s market share dive.

RIM’s tablet effort, the Playbook, is barely selling and only when priced below cost.  It still somehow does not natively do email.

It is hard not to feel bad for the position this once great company is now in.

(Making it easier, RIM has scheduled an 8am ET Monday conference call with the press on the details. Press release follows) END_OF_DOCUMENT_TOKEN_TO_BE_REPLACED