AT&T has announced that it has come to agreement to acquire U.S. carrier Leap Wireless (which operates the Cricket brand) for $15 per share. The acquisition will cover all of Leap Wireless’s assets, expanding AT&T’s coverage to Leap’s 5 million subscribers.

Leap, notably, runs a pre-paid deal for iPhones in the U.S.

This move enhances AT&T’s spectrum, retail store count, employee number, and more, so it is likely a positive move for its wireless customers. It’s possible that this announcement is related to the upcoming press event AT&T has scheduled for July 16th.

END_OF_DOCUMENT_TOKEN_TO_BE_REPLACED

We went hands on with the Leap Motion controller a couple times already and we were quite looking forward to the potential for gesture controlled apps that it offers devs. Back in February the company announced that it would be ready to ship the device by May 19 with pre-orders available through BestBuy, but today Leap Motion announced its gesture controller would be pushed back over two months until July 22nd.

Leap said the decision behind the delay is to allow more time for testing (via TNW):

“There’s nothing catastrophically wrong,” Buckwald added, “we’re very proud of the product…if we’d tried very hard we would have been able to ship the product [at the original time] but we wouldn’t have had the time to do the iteration and testing that we would want to do otherwise.”

CEO Michael Buckwald will apparently be sending out the following letter to preorder customers later today and answering questions in a Google Hangout tomorrow:

I wanted to reach out to update you on the status of our ship date. After a lot of consideration, we’ve decided to push back the date and will now be shipping units to pre-order customers on July 22nd.

This is not a decision we take lightly. There are hundreds of thousands of people in over 150 countries who have pre-ordered Leap devices, some as long as a year ago. These people are part of our community and there is nothing more important to us than getting them devices as quickly as possible.

We’ve made a lot of progress. When we first started taking orders back in May we were twelve (very tired) people in a basement. Now we are eighty (although still tired and possibly still in a basement). We’ve manufactured over six hundred thousand devices and delivered twelve thousand Leaps to amazing developers who are building applications that let people do things that just wouldn’t have been possible before. These developers have given us great feedback that we’ve used to make huge improvements to the stability and polish of the product. We’re really proud of Leap as both a company and a product.

The reality is we very likely could have hit the original ship date. But it wouldn’t have left time for comprehensive testing. This will come in the form of a beta test that will start in June. We will give the 12k developers who currently have Leap devices access to the feature complete product including OS interaction (today developers only have access to the SDK). We will also invite some people who are not developers to join the beta test.

Ultimately, the only way we felt 100% confident we could deliver a truly magical product that would do justice to this new form of interaction, was to push the date so we would have more time for a larger, more diverse beta test.

I really appreciate your patience. I know it’s been a long wait. Everyone that works at Leap is working tirelessly to make sure that wait is worth it. Thanks so much for your help and support.

Update: Virgin just went live with the iPhone on their website a day early 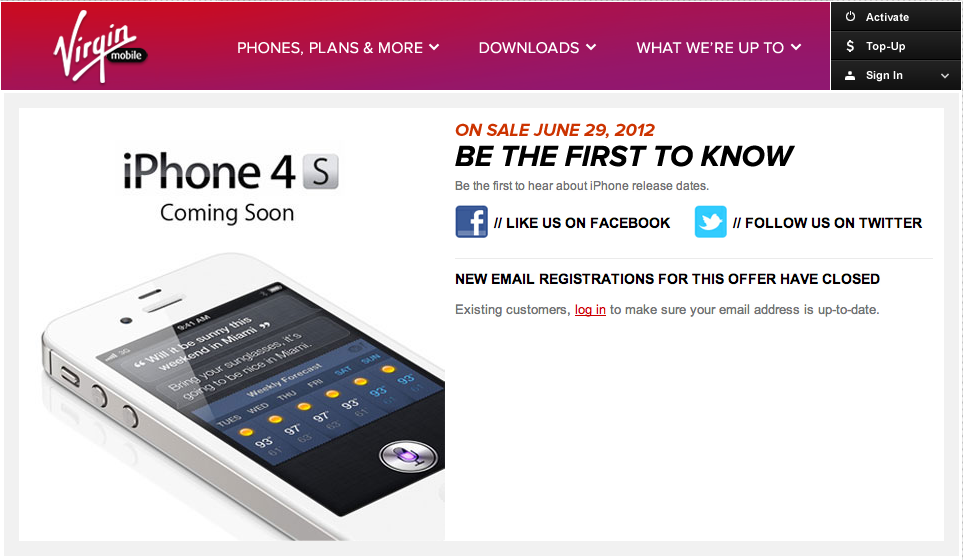 Virgin Mobile plans to open 10 retail stores tomorrow in Chicago to make the most of the iPhone’s launch on its pay-as-you-go service. The Sprint Nextel Corp.-owned business is the second U.S. prepaid carrier to offer the iPhone, after Leap Wireless International Inc., and its new Windy City stores are a prime opportunity to market—and capitalize on— the iOS smartphone.

According to Bloomberg Businessweek:

The new stores also mark a strategy shift for Virgin, which has previously relied on retailers such as RadioShack Corp. and Best Buy Co. to market its service, said Jeff Auman, a vice president at the carrier.

[…] The carrier will begin selling the iPhone online today, with the stores opening tomorrow. The 10 Chicago outlets could lead to a national rollout, the company said.

Virgin offers the iPhone 4S for $649, while the iPhone 4 sells for $549, with monthly plans starting at $30 with a $5 discount is available for customers who enroll in automatic monthly payments.