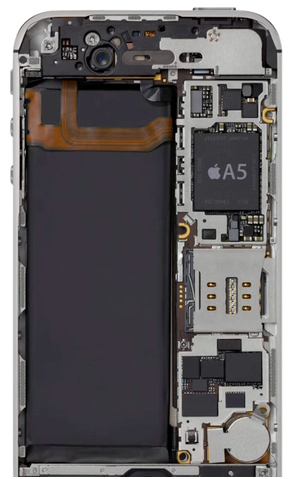 Samsung manufactures the Apple-designed A5 chip found inside iPhone 4S and provides 512MB DDR2 RAM for the processor.

Samsung and Apple are working towards a resolution to the differences that have been plaguing their long-standing relationship, which culminated with some twenty patent infringement claims filed before courts in a dozen countries around the world. Quoting industry sources, Korea Times, asserted Monday that Samsung might provide Apple with custom-built A6 chips for upcoming new iPhone and iPad models.

Today, Yonhap News reports that Samsung COO Lee Jae-yong said his company would continue to supply the Cupertino, California client with crucial components, including Apple’s in-house designed A-family of chips powering their iOS devices. The supply chain ties with Apple, he told reporters upon arriving at a Seoul airport, continue to be long-term. The executive sat down the previous day with Apple CEO Tim Cook following a private memorial service for Steve Jobs, to which he had been invited. His two-hour meeting with Apple’s boss touched on parts for the 2013-2014 period, he told journalists:

The executive, pictured below the fold, also spoke of “a need to compete in a fair manner for the benefit of the consumer”, adding “this stance existed in the past, is taking place now and will occur in the future”. Another indication of attempts to diffuse the ugly legal brawl comes in another report quoting Samsung’s mobile chief Shin Jong-kyun as saying that the Galaxy Nexus smartphone, which was unveiled yesterday with great fanfare, is designed to bypass potential legal attacks from Apple:

Now we will avoid everything we can and take patents very seriously. We will see if it will be 100 percent free [from Apple lawsuits]. I think it is just a start and [the lawsuits] will last for a considerable time. I don’t think there is much gain [from lawsuits against Apple]. What we are losing is the pride in our brand.

Apart from Samsung’s semiconductor fab in Austin, Texas, other chip vendors may not be capable of producing mobile processors for Apple in volume, without affecting quality and all the while meeting Apple’s high standards. Remember, we’re talking up to 200 million chips for iPhones, iPads and iPods in 2012. As for Apple cozying up to TSMC…
END_OF_DOCUMENT_TOKEN_TO_BE_REPLACED