Stanford University’s Silicon Valley Archives currently holds “the largest assembly of Apple historical materials” stored within hundreds of boxes taking up over 600 feet of shelf space in an undisclosed facility outside San Fran.

Stanford historian Leslie Berlin had this to say about the collection:

“Through this one collection you can trace out the evolution of the personal computer. These sorts of documents are as close as you get to the unmediated story of what really happened.” 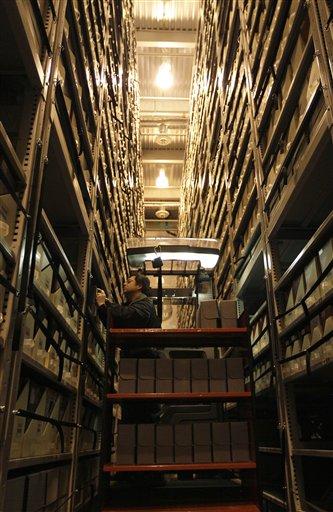 While you may have heard versions of how the name Apple came to be, an interview recorded with Wozniak and Jobs in the 80s (originally meant to be an in-house video for employees) has the two men recalling the exact moment:

Woz: “I remember driving down Highway 85. We’re on the freeway, and Steve mentions, `I’ve got a name: Apple Computer.’ We kept thinking of other alternatives to that name, and we couldn’t think of anything better.”

Jobs: “And also remember that I worked at Atari, and it got us ahead of Atari in the phonebook.”

That video and others were donated to Stanford in 1997 after Jobs returned to the company and plans for an in-house Apple museum were cancelled. Also included in the collection is this “Blue Busters” Ghostbusters-style internal ad featuring Apple executives, embedded below. The ad was originally shown in October 1984 at an international sales meeting in Hawaii. Blue Busters is obviously a not so subtle reference to their biggest competitor at the time, IBM.

Other items currently stored in the Stanford Apple Collection include (via AP): END_OF_DOCUMENT_TOKEN_TO_BE_REPLACED