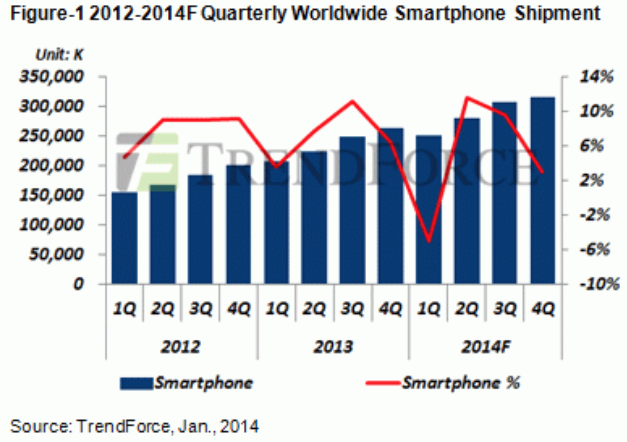 TrendForce is predicting that total worldwide smartphone sales will fall by around five percent in the first quarter of this year. If so, this will be the first fall in two years.

It doesn’t mean demand for smartphones is actually dropping, but rather than the upward trend has slowed to the point that the seasonal effect – people buying smartphones as holiday gifts – is now bigger than the overall growth rate.

Apple and Samsung of course maintain their lead, though Sony saw significant growth in its home territory of Japan, and LG’s share grew 57 percent year-on-year to a 4.2 percent market share thanks largely to sales of the Nexus handsets it makes for Google. 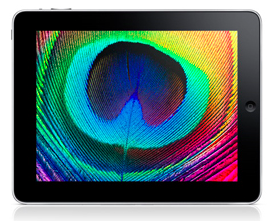 CNET’s Brooke Crothers has heard some information about the iPad 3’s upcoming 264PPI display. As we’ve heard a lot in the past, it will be a 2048×1536 resolution display as long as the Korean display manufacturers, Samsung and LG, can produce them in large numbers. According to his source, there could be some problems building it in the monstrous quantities that Apple demands.

The closest that iPad display manufacturers like LG Display and Samsung can get is 2048×1536 resolution display, according to the source. That’s a PPI of 264, twice the 132 PPI on the iPad 2.

But whether manufacturers can make them in volumes that Apple demands is the question. “They have production plans for 2,048×1,536 displays. Starting in November. But those are only plans at this point,” said the source, referring to LG and Samsung.

“It’s not a question of making just one. That, of course, can be done. The challenge is making lots of them,” the source said. “This is a quantum leap in pixel density. This hasn’t been done before.”

If manufacturers are not able to hit the volumes necessary for the higher resolution, there is an interim option of 1,600×1,200, according to the source.

The display is also expected to have a brightness of 550 nits. That’s pretty bright, as the typical laptop display panel tops out at about 350 nits.

I don’t think it is as easy as dropping the resolution down to 1600×1200. Apps don’t scale that easily even if the aspect ratio is the same. If for some reason, they can’t pump out the 2048×1536 in sufficient numbers (and Samsung is already testing better ones), Apple will continue with the same resolution….or wait until they can produce enough high resolution displays.

END_OF_DOCUMENT_TOKEN_TO_BE_REPLACED

Chipworks’ latest batch of iPad 2s, however, seem to be using a new Wise-View chip. Little to no information can be found about the chip at this time, except that it appears to be a technology developed by Samsung. Sadly there’s no information on Samsung Semiconductor’s site regarding this display driver product line.

Despite lack of information, the Wise-View chip can be yours on Taobao for 24 Yaun a piece, or some $3.7. iFixIt speculates that Apple changing display driver suppliers may be “foreshadowing the release of an updated iPad with a higher-res screen”, providing no substantiation to support the theory, though. If you ask us, it’s just Apple at its best, covering all bases and making sure it doesn’t rely too heavily on a sole supplier.