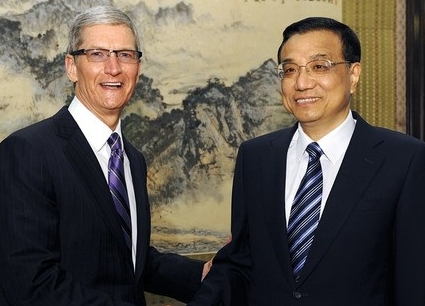 We knew earlier this week that Tim Cook had “great meetings with Chinese officials” during his first trip to China as chief executive officer of Apple, but today a report from Bloomberg gives us new details about exactly who he met in China. According to the report, Cook met Chinese Vice Premier Li Keqiang, who could replace Wen Jiabao as Premier of the country’s government in 2013. Cook also met with Beijing Mayor Guo Jinlong a day before. Apple spokesperson Carolyn Wu told Bloomberg that Li and Cook had a “great meeting,” but she declined to talk about the specifics.

However, a report from The Wall Street Journal cited local media reports and claimed Cook and Li were discussing “intellectual-property issues and greater cooperation.”

According to representatives for the creditors of Shenzhen-based Proview, the company Apple is in a dispute with over the iPad trademark, Cook is on a “political public relations campaign” regarding the legal disputes. Li Su, president of Hejun Vanguard Group who represents Proview’s creditors, made the remarks. When Apple’s spokesperson Carolyn Wu asked about Li’s comment, she said the following: