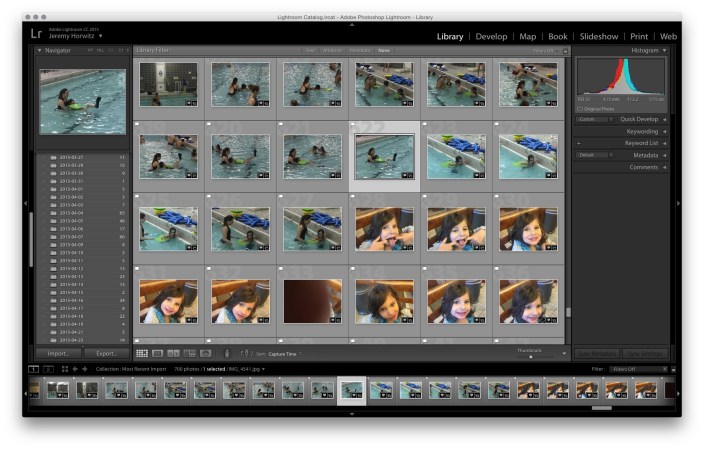 Until this year, Mac owners had three major options for organizing large digital photo collections: Apple’s mainstream iPhoto, Apple’s “pro” app Aperture, and Adobe’s similarly professional-grade Lightroom. When Apple discontinued iPhoto and Aperture in favor of an even more basic app called Photos, many people —amateur photographers and professionals alike — had to decide whether to downgrade to Photos or switch to Lightroom. Apple understood that it was ceding at least the professional market to Lightroom, and even helped Adobe to develop Aperture and iPhoto to Lightroom importers. With the writing on the wall, some people switched to Lightroom 5 well before Photos officially debuted last month.

I didn’t; since Lightroom 5 was almost three years old, I wanted to see what Adobe would deliver in its much-anticipated sequel. On April 21, Adobe released Lightroom 6 and Lightroom CC (2015) as standalone and cloud-linked versions of the same app. Both promise major speed improvements over Lightroom 5, new tools and brushes, a new facial recognition feature, automatic HDR and panoramic photo creation, and new slideshow options. As part of Adobe’s “Creative Cloud,” Lightroom CC comes bundled with Adobe’s latest version of Photoshop, plus cloud photo synchronization services, for $9.99 per month. Alternately, Lightroom 6 can be purchased by itself for $149 as a standalone download, minus Photoshop and cloud functionality.

Below, I’m going to focus on the key questions Aperture users have been asking: what it’s like to transition from Aperture to Lightroom — including new details added after initial publication of this article — plus which version of Lightroom to buy, and whether transitioning is a good (and safe) idea. The answers may surprise you…

END_OF_DOCUMENT_TOKEN_TO_BE_REPLACED

Following months of rumors, Adobe is today announcing Photoshop Lightroom 6 and Lightroom CC, the latest versions of its popular photo editing and organization software. Sharing the same code, design, and much of the same functionality, the two Lightroom releases are separated into purchasable (Lightroom 6) or subscription (Lightroom CC) versions, only the latter of which can sync with Adobe’s mobile applications. Apple notably recommended Lightroom as a replacement for its recently-discontinued Aperture professional photo application, and worked with Adobe to build an Aperture library importing tool to aid users during the transition.

Lightroom manages large photo libraries, while offering photographers powerful tools for RAW and JPEG image adjustment. Now solely a 64-bit application, Lightroom 6/CC promises huge speed improvements when applying prior effects to images, as well as newly added tools and brushes. As shown in the embedded video, facial recognition has been added, enabling functionality similar to Apple’s Faces feature from Aperture and iPhoto. A new HDR (high dynamic range) tool uses two images to create a composite photo with more vivid colors and detail, while brushes such as radial and graduated filters have been added. The app has also gained new slideshow options, automatic panorama stitching, video slide shows, and many other features.

Photoshop Lightroom CC can be downloaded now as part of Adobe’s Creative Cloud Photography subscription service for $9.99 per month; a prepaid year of CC Photography access is normally $119.88, and currently on sale at B&H Photo Video for $99.88. Photoshop Lightroom 6 can be ordered for $149 as a standalone download. Adobe has also released version 1.4 updates to its mobile apps Lightroom for iPad and Lightroom for iPhone with support for Lightroom CC, improved cropping, and TIFF file support. Both iOS apps are now available for free from the App Store, but require Creative Cloud subscriptions.