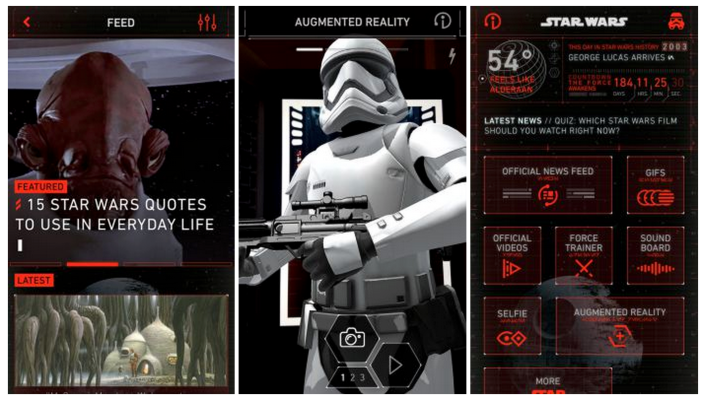 As we ramp up for Star Wars: The Force Awakens to hit theaters in December, we are getting Storm Trooper Bluetooth speakers, a new mobile RPG and a SW themed playset for the upcoming Disney 3.0. But it looks like it won’t stop there as Disney has just launched an official new mobile app. Simply named “Star Wars”, this is not a game, but rather a new hub app for “breaking news, rich media, social updates, special events, interactive features” and more:

On top of a basic newsfeed that draws content from all the official Star Wars channels and some typical countdown timers to big releases, there are also some interactive elements to the app as well. There are soundboard and GIF features that provide official clips from the films that users can share on message apps and even a SW themed weather function that compares current temperatures with well-known locations from the Star Wars mythos.

You’ll also find Augmented Reality experiences, a lightsaber trainer that makes use of your device’s motion sensor, and the ability to take as many Star Wars selfies as your heart desires. Much like the Show Your Disney Side app, you can choose from a number of popular costumes from the films, settings and the ability to drop other characters in the background.

The new Star Wars app is available to download for free starting right now on iOS. Head over to our daily game/app roundups for all the best discounts and freebies across every platform.