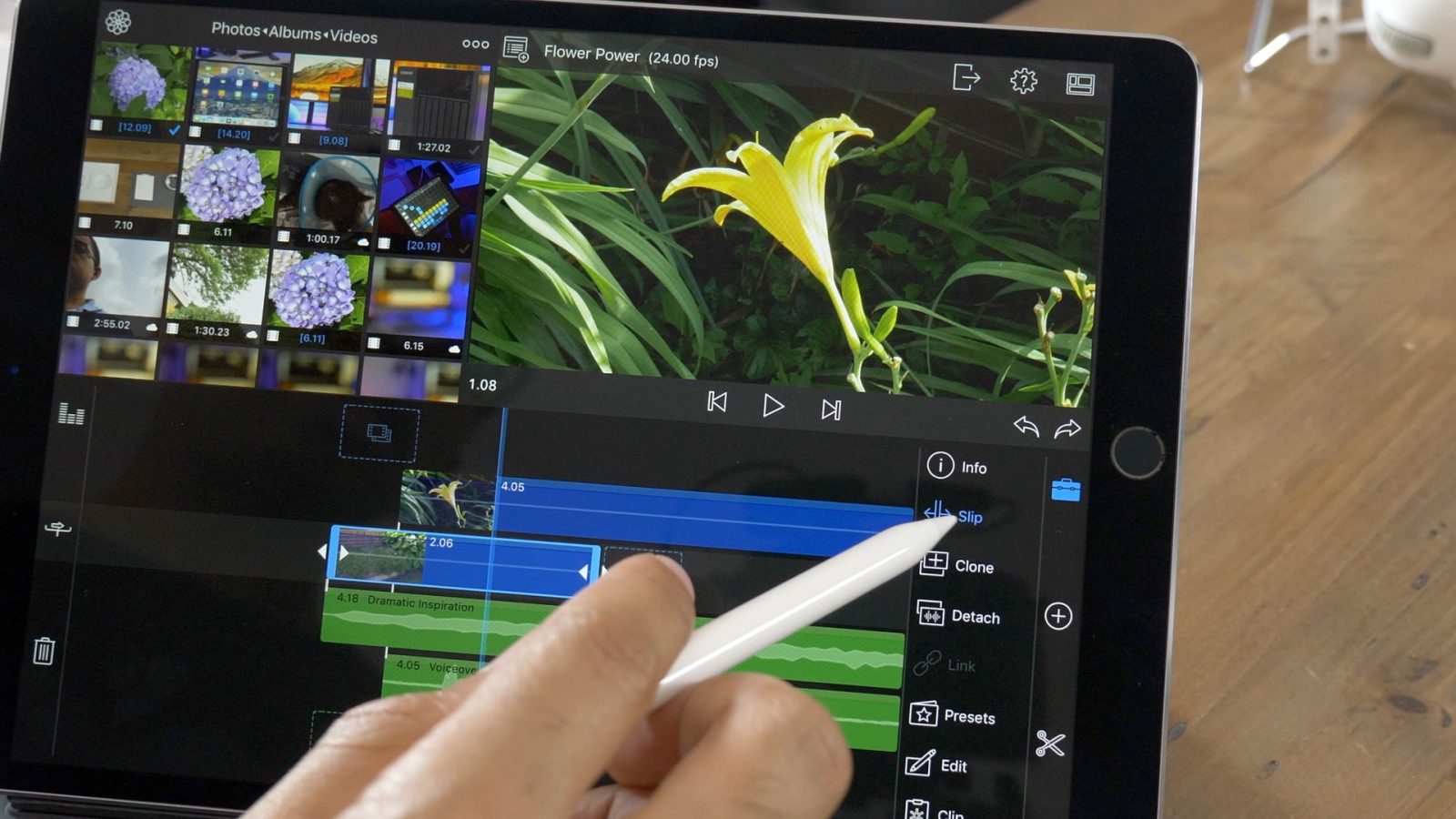 LumaFusion ($19.99) is a comprehensive multi-track video editing app for the iPad and iPhone. Far surpassing the ability of iMovie, it’s the closest thing to having Final Cut Pro X on an iPad.

LumaFusion allows you to easily edit multiple streams of 4K video on iPad or iPhone, and uses many advanced video editing features like Ripple Edits, L and J cuts, positioning and resizing, keyframing, framerate adjustments, speed adjustments, and much more. It’s hands-down the most advanced video editing app on iOS. You can read more about the app in our hands-on video walkthrough.

LumaFusion, which is in my opinion the best and most powerful video editing app available for iOS devices, recently received a big update that accommodates 10-bit HDR workflows. The version 2.4 update, which is free to existing LumaFusion customers, allows iPhone 12 HDR video shooters to import and export 10-bit HDR video.

END_OF_DOCUMENT_TOKEN_TO_BE_REPLACED

Today is a big day for LumaFusion users, as it marks the day that the app’s long-awaited FCPXML export compatibility for Final Cut Pro X goes live.

With version 2.2 of LumaFusion, users have the option to purchase FCPXML export compatibility for $19.99 via in app purchase. If you’re a video editor who likes to begin editing projects on the go, and finish those edits on your Mac, then this update might be for you. END_OF_DOCUMENT_TOKEN_TO_BE_REPLACED

LumaFusion, a popular mobile video editing app for iOS, has been updated today to version 2.1 with several new features for professional users, including support for external storage, system custom fonts and more for iOS 13 and iPadOS users.

END_OF_DOCUMENT_TOKEN_TO_BE_REPLACED

The original Gnarbox, a small, rugged portable media manager and backup device, was a great idea on paper, but the execution needed work. Today the team from Gnarbox is back with version 2.0 of its hardware. The new Gnarbox features noteworthy improvements over its predecessor, such as a built-in screen for on-device management, and multi-destination copy for increased redundancy.

If you’re an iPad Pro user who regularly works with photos and videos, should you consider adding the Gnarbox 2.0 to your workflow? Read our hands-on account for the details. END_OF_DOCUMENT_TOKEN_TO_BE_REPLACED

The central hall at the Las Vegas Convention Center featured the likes of LumaFusion, Filmic Pro, and Gnarbox  — companies that are all heavily involved with mobile video editing workflows. In this post we’ll take a look at some of their current and future contributions to this space as highlighted at NAB Show 2019. END_OF_DOCUMENT_TOKEN_TO_BE_REPLACED

LumaFusion, far and away the most feature-dense video editing app on iOS, has been updated to version 1.6. This latest release brings some notable enhancements to the table, including  Gnarbox integration.

I’ve covered LumaFusion several times before, and have been impressed by the amount of features that it has built in for serious video editors. Version 1.6 continues to build on the foundation already established by previous versions, and creates a noteworthy hardware partnership in the process. Watch our hands-on video for more details. END_OF_DOCUMENT_TOKEN_TO_BE_REPLACED

I’ve been wanting to do a series on iPad video editing for some time, and I feel that time is right with the maturation of LumaFusion into a powerful app for editing videos on iOS. LumaFusion, as I’ve stated in the past, is the most comprehensive video editing tool available on the platform, and should be the choice for anyone who’s seriously into editing videos via iPad on a recurring basis.

In this initial walkthrough, I step through many of the basic project settings in LumaFusion. This includes creating a new project, adjusting basic preferences, renaming, duplicating, deleting projects, and so on.

By the end of this tutorial, you should have a firm grasp on how to use projects in LumaFusion, which will adequately prepare you to tackle other basic areas of the app, including managing the timeline and source viewer. We’ll be back soon with additional LumaFusion tutorials, with the goal of eventually establishing a full comprehensive video-driven guide to the app. END_OF_DOCUMENT_TOKEN_TO_BE_REPLACED

Hands-on: LumaFusion – this is the iPad video editing app we’ve been waiting for [Video]

If you’ve never heard of LumaFusion ($19.99), I won’t fault you for that. I hadn’t heard of it either until commenters on our YouTube channel vehemently encouraged me to give the app a shot.

Pardon me for initially being skeptical, as I’d heard this story numerous times before: “So and so has produced an amazing app that finally lets you truly edit videos on the iPad.” As a Final Cut Pro X devotee who’s often seen tethered to a Mac, I guess you can say I have trust issues when it comes to such lofty claims.

I’ve tried a handful of video editing apps on iPad, and have walked away disappointed every single time. Most of them promise something that they simply can’t deliver, while others show promise, yet ultimately fail in some key area.

The most competent video editing app that I’ve seen up until now — Corel’s Pinnacle Studio — featured way more power user features than competing apps like iMovie, but it sorely lacked in presentation and ease of use. Speaking of iMovie, Apple has the presentation part down pretty well, but the app falls laughably short in all but the most basic of features — “Final Cut Lite” it is not.

So there’s the backstory to my video editing woes on iPad. Thus, you can imagine how thrilled I am to be able to say that LumaFusion is an absolutely amazing video editing app on iPad (it also works on iPhone!), with a very bright future.

This, folks, is an app that not only has the power and the features, but is actually fairly easy to use, and isn’t fiendishly ugly to stare at for hours on end. LumaFusion shows what’s possible on the iPad, and like Affinity Photo for photo editors, LumaFusion isn’t perfect, but it’s definitely shaping up to be an absolute must-have for iPad video editors. Have a look at our hands-on video as we step through a dozen features that make this app so promising. END_OF_DOCUMENT_TOKEN_TO_BE_REPLACED