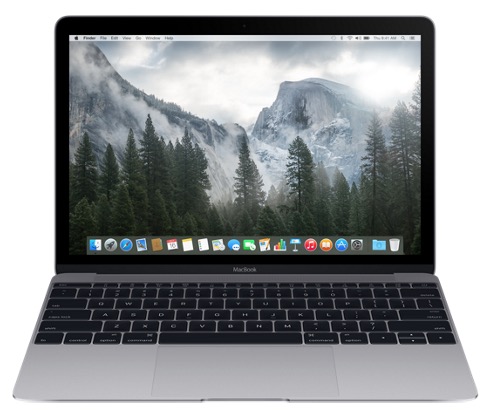 Check out our top stories on MacBook:

Originally released April 10, 2015 and last refreshed April 19, 2016, the all-new MacBook ($1,299 and up from the Apple Store) is the thinnest and lightest Mac laptop ever made. It’s also the first MacBook to be offered in four color options: classic silver, space gray, gold and rose gold.

With a redesigned chassis that’s only slightly wider than the keyboard, the new MacBook’s 0.14″–0.52″ thickness was achieved in part by dropping all external connectivity ports save for a 3.5mm headphone port and a new reversible USB-C port, which can be used for power, data connectivity, and video output. Most of the MacBook’s connectivity is handled wirelessly with 802.11ac and Bluetooth 4 support. It promises 9-10 hours of battery life depending on how the computer is being used.

A redesigned Force Touch trackpad now can sense multiple levels of pressure rather than just one, using four pressure sensors and a haptic feedback pad to replicate the clickiness of a traditional trackpad. Additionally, the keyboard has been completely redesigned to retain the expected clicks, precision, and travel of conventional keys, while cutting their depth and width to fit the chassis. An ultra-thin top lid has only enough depth for a 640×480 FaceTime camera, a compromise for the smaller size.

Just like the first-generation MacBook Air, the new MacBook is aimed at users whose computing needs don’t demand incredible horsepower, yet benefit from a slim, light chassis with a really nice screen. Though you’ll do better in raw dollar terms and power by buying a comparably priced 13″ Retina MacBook Pro, you’ll have nearly twice the weight to carry around (2.03 pounds versus 3.48 pounds) and a larger footprint to manage. The choice of which is best for your needs will be highly personal.

USB-C/Thunderbolt display options have really grown over the last couple of years. While Apple is making its own monitor again with the Pro Display XDR, it’s not the best fit for the majority of Mac users with a starting price of $5,000 (without a stand). Let’s take a look at some of the best USB-C/Thunderbolt displays available in the $400-$1,300 range.

END_OF_DOCUMENT_TOKEN_TO_BE_REPLACED

A MacBook university fraud saw a sister and brother pocket $4 million. The sister over-ordered MacBooks meant for university employees, and the brother then sold them on Craigslist.

END_OF_DOCUMENT_TOKEN_TO_BE_REPLACED

Apple has long been on a mission to make MacBooks ever thinner, and a new patent granted today describes how a retractable keyboard could help.

Earlier patents suggest that Apple’s long-term goal is a completely solid-state keyboard, which uses electrostatic charges to allow users to “feel” keys so that touch-typing remains possible, and haptic motors to simulate key presses for the feel of a physical keyboard …

END_OF_DOCUMENT_TOKEN_TO_BE_REPLACED

For years now, we’ve been promised exciting new battery technologies that claim to dramatically boost battery life, and none of them ever seem to materialize. But a new Apple patent application describes a simple way to achieve a worthwhile increase in battery life with nothing more high-tech than a metal housing.

The invention is a little ironic, as it solves a problem Apple originally created back in 2015 with the batteries in the 12-inch MacBook, before subsequently adopting the same tech in the rest of the MacBook lineup …

END_OF_DOCUMENT_TOKEN_TO_BE_REPLACED

If you’re ready to sell or give away your existing Mac notebook or wipe it for another reason there are a few things you’ll want to do in addition to erasing the hard drive. Read along for how to factory reset your MacBook Pro and reinstall a fresh copy of macOS.

END_OF_DOCUMENT_TOKEN_TO_BE_REPLACED

Apple already makes a titanium Apple Watch, but a patent granted today could pave the way for titanium MacBooks, iPads, and iPhones too.

The patent describes how Apple could overcome the challenge of giving titanium an aesthetically pleasing finish, and follows a patent granted last month regarding a method of making a true matte black MacBook …

END_OF_DOCUMENT_TOKEN_TO_BE_REPLACED

Face ID for Mac ‘developed’ by Apple but not coming soon; 5G same

We’ve long expected Apple to offer Face ID for Mac models, just as it does for the iPhone and iPad Pro. Bloomberg’s report on an upcoming higher-end MacBook Air has a mix of good and bad news on this front.

Another feature some have long wanted for MacBooks is the ability to connect to mobile data directly when Wi-Fi isn’t available. The report says the position is the same for both features: They are coming, but not soon …

END_OF_DOCUMENT_TOKEN_TO_BE_REPLACED

We’ve had a couple of reports today, each from solid sources, suggesting that we’ll see significant changes when the 2021 MacBook Pro models appear.

The two reports agree on most things, though there are some differences between them. Notably, Ming-Chi Kuo indicates that removal of the Touch Bar is a done deal, while Bloomberg’s Mark Gurman thinks it is merely being considered at this stage …

END_OF_DOCUMENT_TOKEN_TO_BE_REPLACED

A pair of newly granted Apple patents shows a MacBook wirelessly charging an iPhone, iPad, and Apple Watch. They describe two-way charging coils that can be used to charge the MacBook itself, but also used to allow the MacBook to charge other devices.

The patents also show an iPad charging an iPhone and Watch (right), and follow a separate patent application for a MagSafe battery case, which can charge both an iPhone and a set of AirPods …

END_OF_DOCUMENT_TOKEN_TO_BE_REPLACED

If you’ve ever wished Apple made matte black MacBooks, a new patent shows that the company is at least considering the idea.

Apple begins by explaining the likely reason it hasn’t yet done it: it’s really hard to get a true black, rather than a dark grey …

END_OF_DOCUMENT_TOKEN_TO_BE_REPLACED

Opinion: Is the base MacBook Air M1/8GB powerful enough for you?

Last year I picked up a very expensive computer — a top of the line 2019 16-inch MacBook Pro upgraded to an i9, 1TB of storage, and 16GB of RAM. But I just couldn’t wait to see how these M1 chips actually perform, so I decided to pick up the base $999 MacBook Air to see how it would hold up side-by-side with my 16-inch behemoth. The results are incredible.

END_OF_DOCUMENT_TOKEN_TO_BE_REPLACED

The new MacBooks are here, and that means it’s time to trade in your old, clunky, slow computer! While we’re always keeping you in the loop on the best MacBook trade in deals in our roundups every month, here’s what we’re finding for trade in values for Macs all the way from older MacBook Air models to the new-ish 16-inch MacBook Pro…

END_OF_DOCUMENT_TOKEN_TO_BE_REPLACED

MacBook maker Compal has reportedly been hit by a ransomware attack over the weekend, the hackers claiming to have encrypted files and stolen unencrypted data.

It comes just ahead of today’s event to announce the first Apple Silicon MacBooks, and at a time when Apple has reportedly placed very large orders for the next-generation MacBooks …

END_OF_DOCUMENT_TOKEN_TO_BE_REPLACED

As it’s become a little tradition this fall, Apple has included another little Easter egg on its events page for the “One more thing” special November event. And this time around the subtle AR surprise hints that the first Apple Silicon Mac will be a new MacBook.

END_OF_DOCUMENT_TOKEN_TO_BE_REPLACED

A Chinese-language newspaper has posted what it claims is the chip roadmap for the first Apple Silicon Macs, citing supply-chain sources to suggest three versions of the A14 chip.

The report says that there will be three variants of the A14 processor so far seen in the iPad Air and iPhone 12, two of which will power Apple Silicon Macs …

END_OF_DOCUMENT_TOKEN_TO_BE_REPLACED

Michael Pick, whose nickname is The Casual Engineer, has created a home-built “MacBook Mini” that he calls the world’s smallest MacBook…

END_OF_DOCUMENT_TOKEN_TO_BE_REPLACED

Noted Apple analyst Ming-Chi Kuo believes that Apple’s miniLED plans are being accelerated, the company using the screens in more 2021 iPads and MacBooks than expected.

His previous estimates had suggested that the new backlighting technology for LCD screens would be used only on the top models next year, but it now appears that it will make it into some mid-range models too …

END_OF_DOCUMENT_TOKEN_TO_BE_REPLACED

Macworld explains how to turn a Chromebook into a pseudo MacBook

If you have MacBook tastes but a Chromebook budget, Macworld says you needn’t despair: with a bit of configuring, you can create a pseudo MacBook …

END_OF_DOCUMENT_TOKEN_TO_BE_REPLACED

It was suggested earlier this week that we might see an Apple Silicon 12-inch MacBook before the end of the year, as one of Apple’s first ARM-powered Macs.

If the report is true, I’ve already talked myself into buying one, despite one rather awkward fact…

END_OF_DOCUMENT_TOKEN_TO_BE_REPLACED

An unreleased MacBook battery appears to have made its way through a pair of regulatory databases this month. Details are unclear, but new filings with the China Compulsory Certificate database and the UL Demko certification reveal what seems to be a Mac with the model number A2389 and a 4,380mAh battery.

END_OF_DOCUMENT_TOKEN_TO_BE_REPLACED

Whether you just got a pair of AirPods or AirPods Pro or have had them for a while but just haven’t used them with your Mac, follow along for how to connect AirPods and AirPods to your Mac. We’ll also look at how to set up seamless one-click or keyboard shortcut pairing with a Mac.

END_OF_DOCUMENT_TOKEN_TO_BE_REPLACED

The new MacBook Pro is available to order today, starting at $1299. Apple has doubled the base SSD storage across all configurations.

END_OF_DOCUMENT_TOKEN_TO_BE_REPLACED

Opinion: The first ARM-powered Mac will be a MacBook Air … or an iBook

We’ve been wondering for years when we might see the first ARM-powered Mac, and a Bloomberg report today suggests that it will be next year.

Apple is set to release its first Mac based on a custom ARM chip next year, according to Bloomberg. This lines up with previous timeline reported from Bloomberg, which cited late 2020/2021 timeframe, and other reports from publications like analyst Ming-Chi Kuo.

The different architectures make it difficult to predict the relative power of an ARM-based Mac against an Intel one, but there’s no reason in principle why an ARM-powered Mac couldn’t be more powerful than some of today’s machines …

END_OF_DOCUMENT_TOKEN_TO_BE_REPLACED

Satechi launched its latest multi-device USB-C charger at CES back in January and it comes with the most ports and power you’ll find in pretty much any option on the market. Read on for our full review of Satechi’s 108W USB-C PD Desktop Charger.