One 'Machine' story May 2012
See All Stories

Report: Apple breaks records with production investments, but for what? 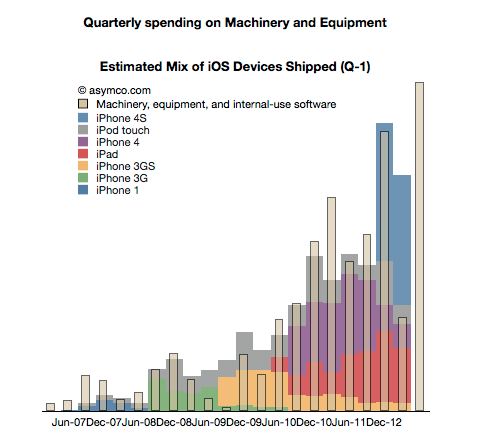 A new report this morning detailed Apple’s investment in equipment and machinery during the most recent quarter as record-breaking, which indicates the company is certainly up to something.

According to Asymco, Apple’s financial reports hint at even more future investments. The Cupertino, Calif.-based Company spent $1.3 billion in the last quarter, with another $2.5 billion needed over the next two quarters.

“Such numbers are hard to grasp. They are unprecedented not only for Apple but for almost any comparable company,” explained Asymco’s Horace Dediu.

The graph above illustrates the increase in quarterly spending for “machinery, equipment, and internal-use software.” So, what does Apple have in the works that requires so much machine-powered investments?

9to5Mac revealed today that the sixth-generation iPhone will have a 3.95-inch display at a 1,136-by-640-pixel resolution, and it will have a new dock connector. Of course, simply upgrading the iPhone does not explain Apple’s deep investment into production equipment.