The MS Surface table re-imagined with an amazing Apple aesthetic 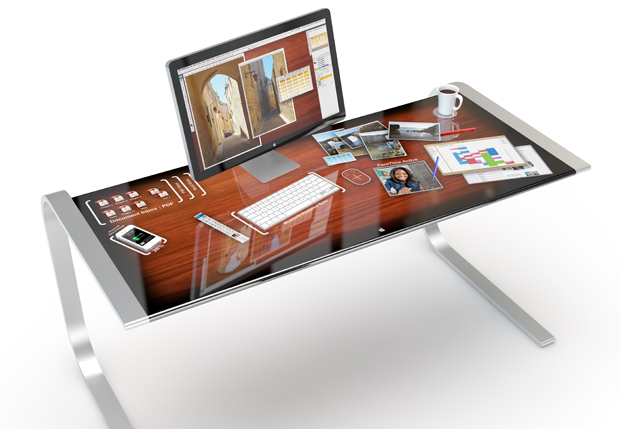 Forget Microsoft Surface, this is what the perfect Apple worktable would look like. You would simply place an iOS device upon the desk to sync with iTunes and it would wirelessly sync data with iCloud. Its multi-touch surface would allow for a range of possibilities like operating your computer the Magic Trackpad style. Imagine being able to schedule appointments or make phone calls using its entire touch-sensitive surface, also doubling as a huge secondary display.

The eye-catching Apple-friendly desk of the future —affectionately called iDesk— was conceived by designer Adam Benton and posted at MacLife. Too bad Apple will never make this, but the artist rendition really has me hooked.  Go past the break for another image.

END_OF_DOCUMENT_TOKEN_TO_BE_REPLACED

Peripherals aplenty as Apple preps to ship its Thunderbolt Display

Usually, when a brand new industry standard debuts on Macs, there’s a period of shortage before compatible devices begin trickling in. Thunderbolt is no different. Intel partnered with Apple on Thunderbolt earlier this year and it took Apple several months to update its notebooks, iMac and Mac mini families with Thunderbolt I/O. The offering of supported peripherals was initially limited to Apple’s $49 Thunderbolt cable, LaCie and Promise RAIDs, Matrox gear, BlackMagic’s solution for field video editing and a couple other devices.

Following Intel’s release of the Thunderbolt development kit, more companies are announcing Thunderbolt-ready products. By the way, 9to5Mac, MacRumors and other publications received tips that Apple began shipping its new $999 Apple Thunderbolt Display to stores. Now, among the upcoming Thunderbolt gadgets, Magma’s ExpressBox 3T, seen in the above image, caught our attention. Basically a three-slot expansion chassis allowing any Thunderbolt-equipped Mac to connect to PCIe 2.0 cards, the box also lets you power up your MacBook Air’s integrate Intel HD Graphics 3000 processor with any PCIe graphics cards, useful if you’re going to do some serious video-related work or play latest games on your Air. The accessory is to be demoed at the upcoming Intel Developer Forum which runs September 13 – 15 in San Francisco.