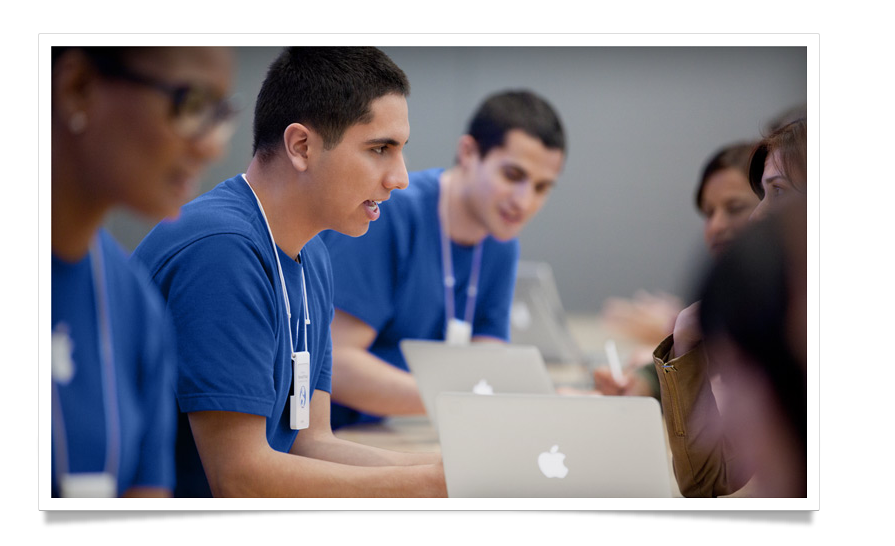 The latest research from NPD Group indicates folks are willing to buy multiple Apple devices primarily due to their pleasant experience at the Genius Bar. A whopping 90 percent, in fact, said they were “extremely or very satisfied” following their experience. The approval rate is primarily attributed to 88 percent of those Genius Bar consumers receiving complimentary service.

That service left almost all of the 40 percent of Apple owners who took their Apple devices to the Genius Bar very happy. Nearly 90 percent of consumers who used Apple’s tech service said they were extremely or very satisfied. In contrast, top 2 box satisfaction among all consumer service interactions was 78 percent. A major part of their satisfaction came from the fact that only a small percentage actually paid for their service. According to the report, 88 percent of Genius Bar consumers said their service was free compared to 78 percent of all consumers.

Apple product consumers also approve the retail giant’s tech support offerings. Sixty percent of consumers claimed they were “somewhat or much more likely” to make another purchase following their experience, while another 31 percent admitted they had a “much more positive view” of the Cupertino, Calif.-based company after their service. However, as the study noted, “physical presence is key.” Fifty-three percent of consumers were extremely satisfied with in-store encounters versus other types of interactions, but 45 percent of younger consumers still preferred virtual communications.

These statistics are interesting, especially considering yesterday’s report from IFOAppleStore. It claimed then-COO Tim Cook and current CFO Peter Oppenheimer pushed former Apple Senior Vice President of Retail Ron Johnson toward revenues over customer satisfaction when then-CEO Steve Jobs was on medical leave in 2009. Moreover, Apple has maintained new policies —despite wide-spread criticism over recent retail layoffs— that reflect budget cuts with an emphasis on revenue. With this outlook, it surely won’t be long until tech support experiences start falling by the wayside.

NPD gathered responses from over 2,000 adults via an online survey in May 2012.

More stats are available in the press release below.