With the North American release of the new Avengers: Age of Ultron movie hitting theaters tomorrow, Korean developer Netmarble has perfectly timed the release of its anticipated “Marvel Future Fight” action RPG for iPhone and iPad.

The game includes a single player campaign, 3 vs. 3 battles, one-finger gesture control or a virtual gamepad, and a familiar RPG leveling system.

With a storyline penned by best-selling Marvel comics writer Peter David, players can experience the world of Marvel firsthand across four action-packed modes. In addition to the PVE Mission Mode, Marvel Future Fight also includes a PVP three-on-three Timeline Battle that will see teams of players fighting heroes from other dimensions. For players looking to take it to the next level, the Villain Siege mode taps on players’ knowledge of the Marvel Universe to uncover evil plots of the most infamous villains, while Dimension Rift Missions will offer a true test of skill for players seeking the ultimate challenge.

To celebrate the launch of the title, Netmarble and Marvel are offering players the ability to unlock Iron Man armor as an in-game item during the first week.

Marvel Future Fight is available for free on the App Store now.

Iger recalled the time when he contacted his buddy Jobs with what he thought was a novel idea: to unleash movies/TV shows like iTunes did for music. Of course, being the visionary he was, Jobs had already thought of this and even brought an early version of the iPod with video to the meeting. And of course, being the businessman he was, Jobs then asked Iger if he would commit Disney content to the project.

Iger used this story as a jump off for a two hour presentation in which other Disney, ESPN, and ABC executives would showcase a smattering of new mobile apps, games, and products…

END_OF_DOCUMENT_TOKEN_TO_BE_REPLACED

Back in February, Apple and Disney teamed up on a new app called Movies Anywhere that allowed iOS users to access their library of purchased movies—whether bought on the iTunes Store, DVD, or other media (with the appropriate redemption code in the box).

Today, Disney has launched the same service for Android users. Movies Anywhere owners will now be able to access their movie library featuring titles from Disney, Pixar, and Marvel from any of their devices. Because this is a cross-platform solution, movies previously purchased on the iTunes Store will now be available to users on Android devices, and iOS users will be able to watch Disney movies they’ve purchased from the Google Play Store.

END_OF_DOCUMENT_TOKEN_TO_BE_REPLACED

Ahead of the official May 3rd launch of the Iron Man 3 feature film, today Gameloft has released the iOS app tie-in taking place after the events of the movie. According to the game’s iTunes page, Iron Man 3 sees the player take up the role of peacekeeper playing as Tony Stark in an “additive, endless 3D runner”.

Iron Man 3 – The Official Game is available on the App Store now for free.

Included in the game is 3 different locations with “endless, self-generating levels”, 18 suits from the various Iron Man movies, and much more:

THE OFFICIAL GAME OF THE MOST ANTICIPATED SUPERHERO MOVIE OF 2013!

– Fight around the world against rising A.I.M. forces

– Enjoy an outstanding 3D world with cutting-edge graphics and animations

– Research and develop up to 18 suits from the different movies (Mark II, Mark 42, Silver Centurion, etc.) 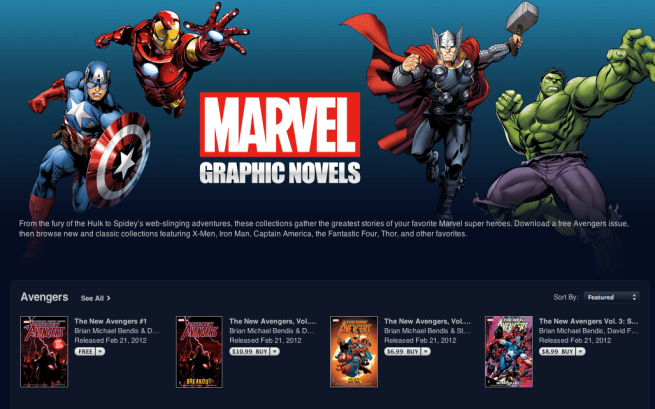 Marvel announced today that comic fans around the globe could now launch the iBooks app and buy its classic graphic novels. 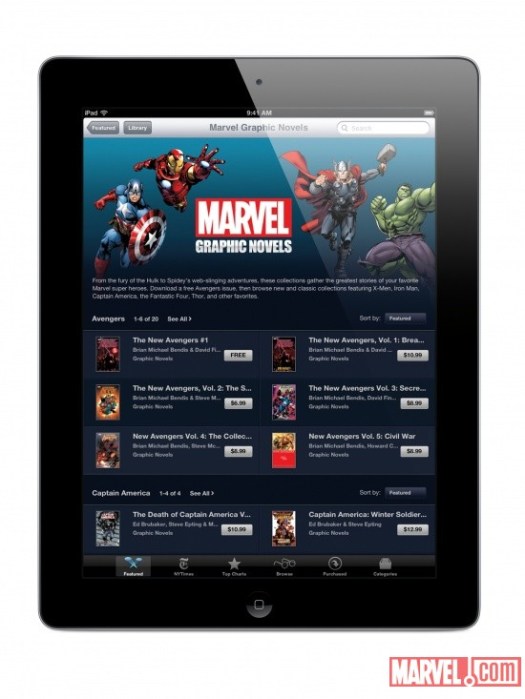 The publisher said it “entered a bold new era in digital comics” with the release of iconic Marvel stories and characters on the free iOS e-book application:

“With an iPad, iPhone, or iPod touch, Marvel fans across the world can now purchase over 80 graphic novels with fan-favorite characters like Thor, Captain America, Iron Man, Hulk, Wolverine, Spider-Man and more by launching the iBooks app,” wrote the company on the Marvel Comic News website.

Fanatics can visit the Marvel Graphic Novels section on the iTunes Store to start downloading the graphic novels today. Prices currently range from free to $24.99.

The publisher promises to add more titles to the choice each week for a “truly digital comic book reading experience that customers will never forget.”

Moreover, “New Avengers Vol. 1: Breakout” is available free of charge for a limited time. As of press time, the e-book had a 4.5-star rating. There are also literary-adapted graphic novels available for children (“Wonderful Wizard of Oz“) and adults (“Pride & Prejudice“) alike, including a pre-order option for “Marvels.”

It is worth noting that the Walt Disney Company bought Marvel Entertainment in 2009 for over $4 billion. Apple’s late cofounder and CEO Steve Jobs was a Disney shareholder and served on its board of directors until August 2011.

A complete list of Marvel’s iBooks offerings is available below.