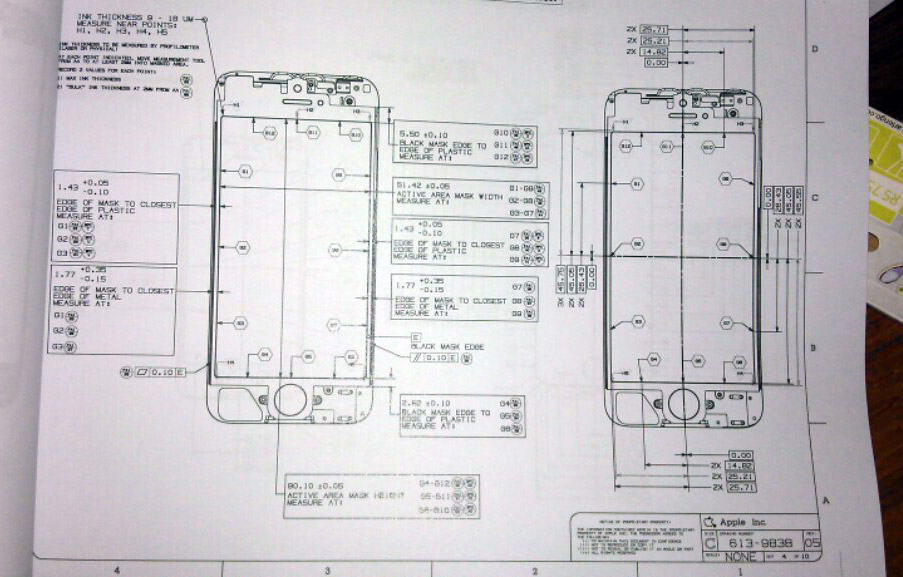 We posted high-resolution images of both the black and white versions of the next-generation iPhone back plate yesterday. Although we could determine many new features of the device, such as the redesigned speaker grills, repositioned earphone jack, and FaceTime camera, the exact display dimensions are still unknown. We noted one of our images depicted what appears to be the next-generation iPhone front glass with enough room for the much-rumored, roughly 4-inch display, but new schematics surfaced today (via Cydia Blog) that show a diagonal opening of just slightly over 4-inches. The designs also shows the repositioned FaceTime camera above the earpiece.

Although calculations of the display show an opening less than 0.1-inch over 4-inches, the display could likely measure a flat 4-inches diagonally as the front panel is typically slightly larger than the display. We noted yesterday that our sources informed us that the next-generation iPhone front glass images we posted feature the same width of the current iPhones, which would comfortably allow for an approximate 16:9 aspect ratio. We cannot confirm the schematic is 100 percent legit, or not just a past prototype, but also all the recent evidence points to a 4-inch next-generation iPhone that we expect to see this October.