Despite Microsoft’s disastrous quarterly earnings report, in which it took a $900M writedown on discounted Surfaces, the company has just pushed out a new ad for its Surface v. iPad campaign.

As with its previous advertisements, Microsoft bashes the iPad’s inability to perform certain tasks that the Surface is specifically designed to handle. This particular ad highlights the iPad’s lack of built-in back stand, USB port, and keyboard accessory, all of which are not built-in to or included with the iPad.

Interestingly, in this ad, the Siri-inspired voiceover says, “This isn’t going to end well for me, is it? Nope definitely not ending well,” which is particularly intriguing given yesterday’s financial results. As evidenced by these results, it would appear that Microsoft’s Surface is  in a precarious position, and not Apple’s iPad. END_OF_DOCUMENT_TOKEN_TO_BE_REPLACED

Here’s the Fun FAQ for Microsoft Surface users who are wondering why the 32GB version they bought actually only has 16GB of usable space: 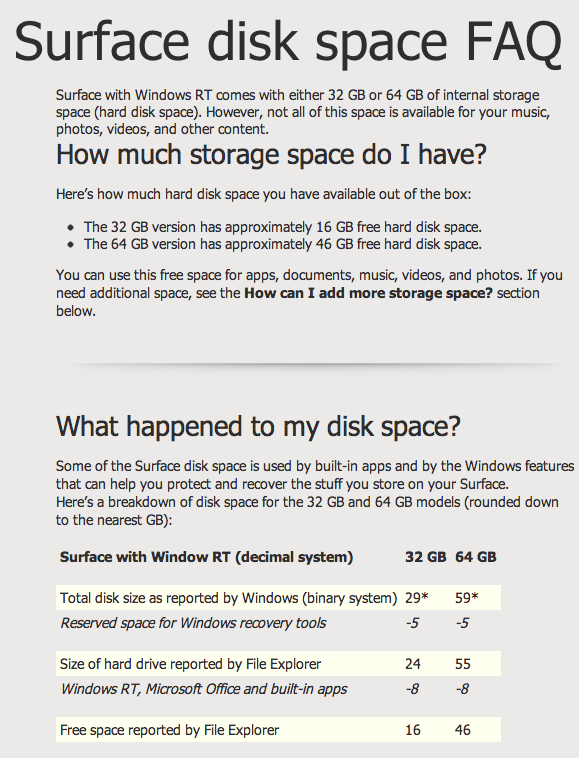 While Microsoft will certainly get off on the wrong foot here in terms of customer expectations, they are still technically accurate—at least in the old desktop world. When you buy a Windows/Mac machine with a 100GB HDD, you expect some of that (but certainly not half of it!) to be used by system software.  However, with the paired-down iOS/Android OSes currently so optimized, you pretty much get what it says on the box.

We reported on a Microsoft Engineer last month, saying users would have more than 20 GB of space.

This is part of Microsoft’s no compromises approach. You get a bunch of legacy stuff that requires a lot of legacy space.