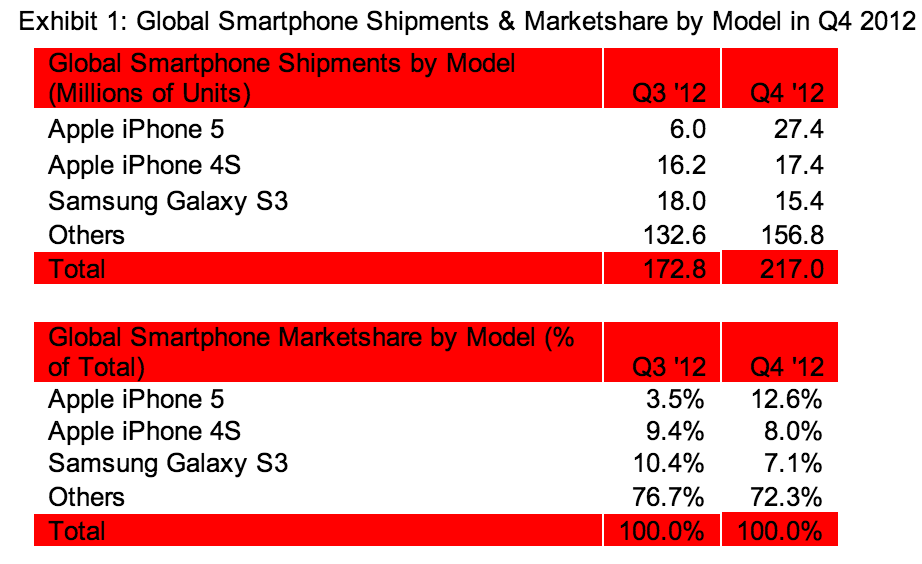 While Apple was able to pass Samsung for the first time to become the No. 1 mobile phone vendor in the U.S. recently, Strategy Analytics latest numbers showed Samsung still dominated among global smartphone shipments in Q4. The research firm is out with a new report today that breaks down global smartphone sales by model, and, not so surprisingly, Apple’s iPhone 5 was able to take the top spot from Samsung’s Galaxy S3 to become the world’s best selling smartphone model during the quarter with 27.4 million units shipped:

Perhaps more surprising is the fact that iPhone 4S, which was discounted at the launch of iPhone 5, is also ahead of the Galaxy S3, as highlighted in the graphic above. The iPhone 4S grabbed the No. 2 position in Strategy Analytics’ study with 17.4 million units sold and 8 percent of the global smartphone market:

In addition to the iPhone 5, Apple shipped an estimated 17.4 million iPhone 4S units for 8 percent smartphone share globally in Q4 2012. Apple’s iPhone 5 and iPhone 4S are currently the world’s two most popular smartphone models.We estimate Samsung’s Galaxy S3 was the world’s third best-selling smartphone model and it shipped 15.4 million units globally, capturing 7 percent share in the fourth quarter of 2012… global demand for the Galaxy S3 appears to have peaked and Samsung will surely be keen to introduce its rumored Galaxy S4 upgrade in the coming weeks to fight back against Apple’s popular iPhone range.