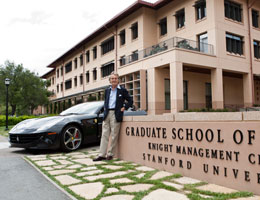 Earlier this week, during a trip to Silicon Valley, Ferrari CEO Luca di Montezemolo gave a speech at Stanford University and met with Apple CEO Tim Cook and “heads of Google” for sit down meetings. The report comes from Ferrari’s website, which claimed Cook and Montezemolo had a “two-hour face-to-face meeting.” There is not much information about what the two chiefs talked about, but Montezemolo said the two companies share a similar passion for design and that he was impressed with Cook’s “availability and openness”:

Passion was also the golden thread at the friendly meeting with Tim Cook: ”I was impressed by his availability and openness,” Montezemolo said leaving the headquarters after a 2-hour face-to-face meeting. “We’re building cars, they build computers. But Apple and Ferrari are connected by the same passion, the same love for the product, maniacal attention to technology, but also to design.”

Tim Cook wanted to see the FF from close up, Montezemolo had used to drive to Cupertino, admiring the shapes and the interior of the 4-door 4×4 from the Prancing Horse, excited about the sound of the 12-cylinder engine. Excitement Ferrari has always been stimulating all over the world and also here in Silicon Valley.