Apple has just released a new download for users on OS X Mavericks to address the recently-discovered “Shellshock” bug. Apple previously noted that that only a few Macs were actually impacted by the bug and that most users were protected by default. The company promised to release an update shortly to address those who had manually configured their computers in a way that left them exposed.

For users on older versions of OS X, the Mavericks fix will not work. To secure those systems, there are separate downloads for Lion and Mountain Lion. The patch will likely be available through the built-in OS X Software Update mechanism soon. There is currently no patch for machines running the public or developer builds of OS X Yosemite.

Apple is preparing to soon release new Mac computers that support super-fast 802.11ac Gigabit wireless, according to code-findings inside of Apple’s latest OS X Mountain Lion 10.8.4 beta seed to developers. The code was located by a tipster inside of the operating system’s WiFi-frameworks folder. As you can see in the image directly below, the 802.11ac code is not found in OS X 10.8.3, which is the latest public release of Apple’s Mac operating system. 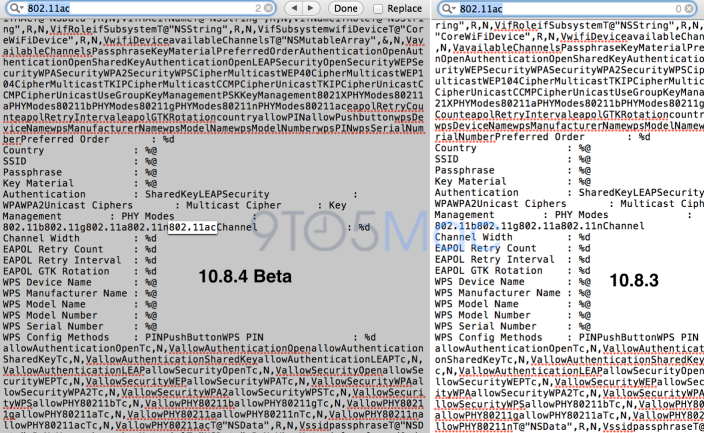 Previous reports have claimed that Apple is working with wireless chipmaker Broadcom to produce 802.11ac chips for future Macs. Now, it appears, Apple’s software is ready to support the new wireless technology as well. More details below…

END_OF_DOCUMENT_TOKEN_TO_BE_REPLACED

Just over a week following the initial developer seed of OS X Mountain Lion 10.8.4, Apple has released a second build. This new build is numbered 12E30.

This new build contains no known issues, and Apple asks developers to focus on Graphics Drivers, Safari, and WiFi.