…except the huge smartphone sticking out the back. 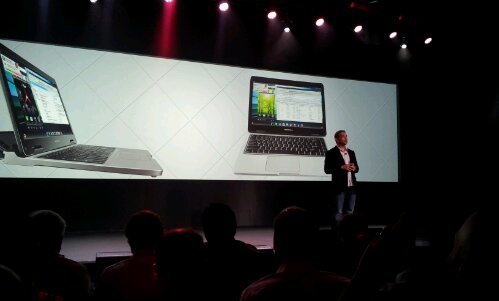 Imitation=flattery? Check the whole lineup below. via 9to5Google

END_OF_DOCUMENT_TOKEN_TO_BE_REPLACED

Although Chrome controls one-fifth of the global web browsing market and has overtaken Firefox as the second most-used browser in the UK, Google’s browser has been growing slower in absolute terms than Apple’s Safari in the month of July. In July, Chrome added .34 percentage points of market share for a 13.45 percent web usage share. In the same period, Safari grew .57 percentage points for a 8.05 percent web usage share in July, per latest Net Applications metrics. Apple’s and Google’s browser were the only ones growing (with the exception of the Other category), while Microsoft’s Internet Explorer and Mozilla’s Firefox ceded market share and had 52.81 and 21.48 percent web usage share.

A big factor: Apple just revamped its consumer MacBook Airs and Mac Minis as well as refreshing the Mac OS with Lion.

Of course, the numbers are not representative of the whole market because Net Applications derives stats from some 40,000 participating web sites, but they’re a good and fairly accurate indication of market trends.

END_OF_DOCUMENT_TOKEN_TO_BE_REPLACED

An engineer with Mozilla hinted that the final Firefox 4 build will be ready for public consumption the following Tuesday, March 22. It’s set to ship on multiple platforms, including Windows XP. Following up on a recent Release Candidate build, Damon Sicore, Mozilla’s senior director of engineering, mentioned the March 22 release date in a Mozilla Development discussion on Google Groups.

END_OF_DOCUMENT_TOKEN_TO_BE_REPLACED

Firefox is now the most popular browser in Europe

Here’s some interesting news from the periphery.  In Europe, where Microsoft was forced to institute a ‘browser ballot ‘upon the installation of Windows (giving Opera, Safari, Chrome, Firefox and IE equal billing), Firefox has just passed IE as the most popular browser on the continent.

That’s according to Statcounter who told Reuters “This appears to be happening because Google’s Chrome is stealing share from Internet Explorer while Firefox is mainly maintaining its existing share. We are probably seeing the impact of the agreement between European Commission competition authorities and Microsoft, to offer EU users a choice and menu of browsers from March last year.”

Given equal footing with other browsers, users just don’t pick IE (remember this ballot is only a year old and it will likely get much worse for Microsoft.