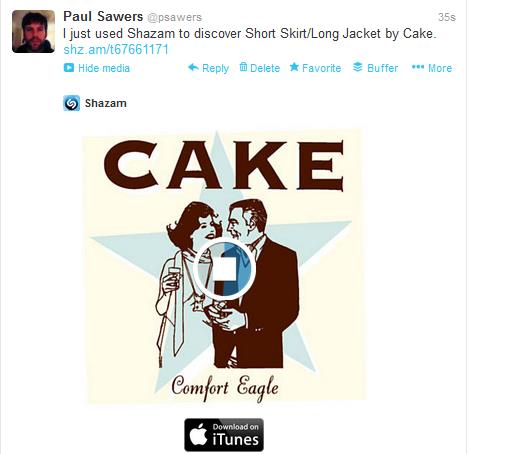 The latest version of music tagging and discovery app Shazam now offers instant previews when you tweet a track and offers faster song recognition on the iPhone 4 and 3GS.

○ Much faster recognition, especially on the iPhone 4 and 3GS.
○ Better recognition in difficult environments.
○ Now when you tweet, your followers can play previews right in Twitter through our Twitter Card.
○ Explore charts are more dynamic, showing you what’s hot in the last seven days.
○ New TV experiences (US only).

A new iPad version of Shazam available today introduces a whole raft of new functions, ranging from passive tagging without user input to the ability to recognise a song and then play it in Spotify or Rdio.

With passive tagging, the app continually listens to any music in the background and automatically tags it, ideal for use in bars where you may idly wonder what a track is but not want to go to the trouble of manually checking. The feature also works in the background, displaying a notification while the iPad is running other apps. Shazam’s claim of one-second tagging appears somewhat optimistic, however: a random sampling of tracks I tested took the usual several seconds.

Shazam for iPad also introduces the kind of networked feature which seems to be expected in apps these days even if we’re not quite sure why. You can see which music and TV shows people are currently tagging in your country, city of neighborhood – as well as use a map to see tagging charts for anywhere else in the world.