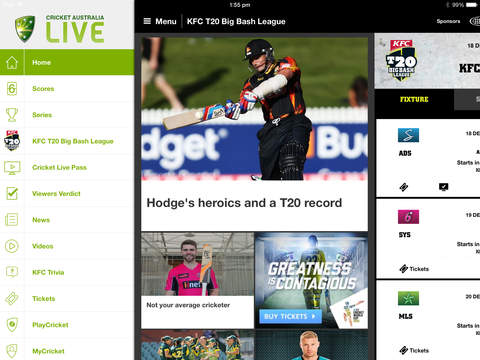 Apple TV users in Australia are receiving new content today with the launch of Cricket.com.au on the platform. Cricket Australia, the governing body for professional and amateur cricket in Australia, made the announcement today noting that the channel will be free and offer the “latest videos as well as highlights from the archive.”

Cricket Australia on Apple TV will give fans free and immediate access to the latest news and features, extended highlights from every day of international cricket played in Australia this summer, as well as rare footage from the archives that showcase some of Australia’s most famous cricketing clashes… Cricket fans will also enjoy unique feature videos that go behind the scenes of Australian cricket and get closer to current stars and legends, like Shane Warne and Adam Gilchrist. Fans will also find cricket skills tutorials from the likes of George Bailey, Nathan Lyon and Ellyse Perry.

Apple TV users should be able to access the new Cricket Australia channel starting today. The press release says the app is entirely free but doesn’t specify whether or not users might be required at some point to purchase one of the service’s streaming subscriptions that usually cost $5/month or $30/year.

Last summer Apple TV users in the US also received access to cricket content through sports broadcaster Willow TV, the Official Broadcaster of Cricket in the United States and Canada. That channel, however, requires a $15/month subscription for access to most content.