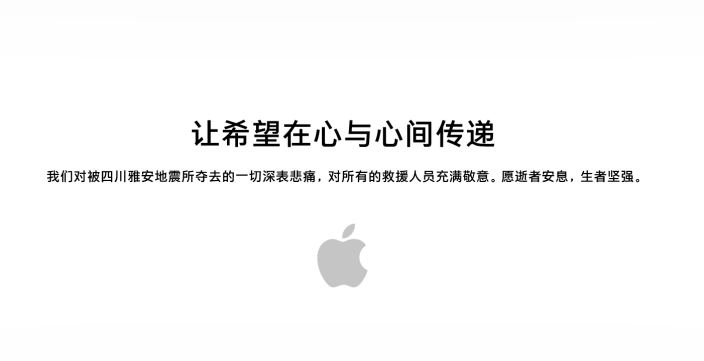 Apple has updated its official China website homepage to offer its respect and sympathy following the disastrous earthquake that has affected the country over the past few days.

The acknowledgement present on Apple’s site reads as follows:

Our deepest condolences to those who were taken away by the Sichuan Yaan earthquake, and respect to all the rescuers. May those who have passed away rest in peace, and may the survivors stay strong.

The company has also offered a statement that pledges cash donations and new Apple devices to help schools that have been affected:

In this difficult time our hearts are with the Sichuan earthquake victims. In addition to cash donations to help the victims ride out the storm, we will also commit to donating brand new Apple equipment to some of the schools in the affected region, and the local Apple staff will be on standby to provide support.

Apple has reportedly pledged 50 million Yuan in total. (Thanks to Richard Lai from Engadget for the translations.)
END_OF_DOCUMENT_TOKEN_TO_BE_REPLACED