Pinch? Swipe? How about “dig a hole” or “open the window”… Apple files patent for new iOS interface elements 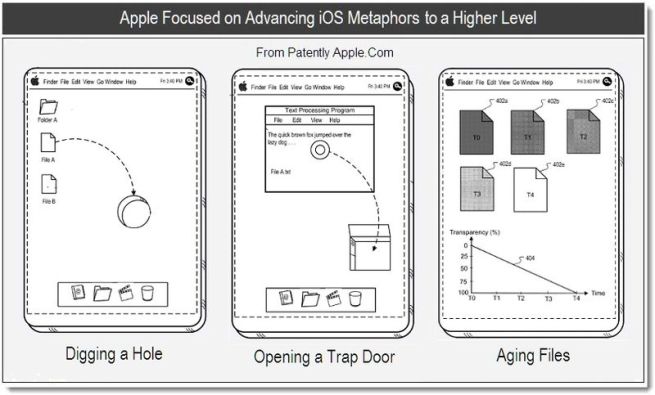 Pinch? Swipe? How about “dig a hole” or “open the window”? Another round of Apple Inc filed patents have been published today by the US Patent & Trademark Office. The most interesting of the latest patents (via Patently Apple) is one focused on “advancing iOS metaphors to a higher level”. What does this mean exactly?

Essentially it would see iOS including a number of new interactive UI elements, many of which will replicate the experience of being able to “manipulate and organize various graphical objects”, similar to the desktop-like environment of “conventional personal computers” (OS X). In other words, Apple wants you to have more control over what you can do with elements within iOS, presumably to close the gap between what’s possible on OS X compared to current iOS builds… which also highly supports theories of iOS and OS X becoming one in the future.

Apple is always looking for new ways to distinguish iOS from the pack and today Apple introduces us to a number of new GUI gestures and metaphors that are fun and Kooky – if not creatively insane. The first one describes the notion of “digging a hole” in your interface that will allow you to drop a file into it quickly or act as a garbage bin or other uses.

Apple also described a number of other interactions similar to “digging a hole” including opening a trap door or window via gestures. END_OF_DOCUMENT_TOKEN_TO_BE_REPLACED