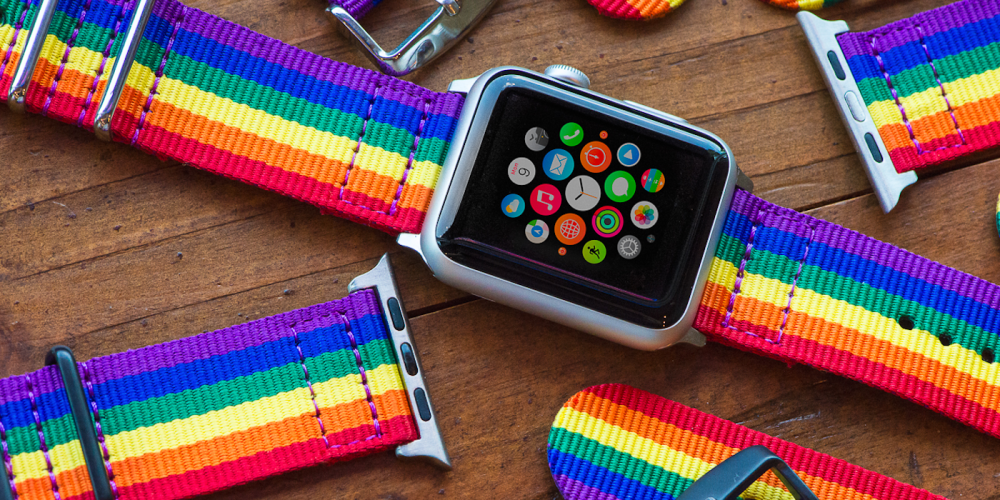 A little more than a month ago Apple gave a limited-edition rainbow colored Apple Watch band to its employees who marched in San Fransisco’s LGBT Pride parade. With no official release in sight and no worthy alternatives on the market, it seemed the only way to get your hands on one was to pay insane eBay prices. But that’s all changed this morning. Clockwork Synergy, a watch accessory maker based in Maryland, has just launched a Pride version of its Classic NATO Apple Watch band featuring a rainbow design that looks nearly identical to the one Apple gifted its employees. What’s more, both bands are made of nylon.

END_OF_DOCUMENT_TOKEN_TO_BE_REPLACED

Just over a week ago, thousands of Apple employees, including CEO Tim Cook, took to the streets of San Francisco to take part in the Pride Parade. The company has not been hesitant to share its views on LGBT rights, and the parade was yet another instance of that. This evening, Apple uploaded a video to its official YouTube channel showing off all of the effort that went into the Pride Parade last week and its “unwavering” support for equality and diversity.

END_OF_DOCUMENT_TOKEN_TO_BE_REPLACED

Apple is out in full force including CEO Tim Cook for the Pride Parade in San Francisco today. Apple’s CEO hasn’t ever been ambiguous about his support for LGBT issues and he was joined by Apple Environment Director Lisa Jackson and what looks like thousands of other Apple employees on Market St. in San Francisco today.  Update: Reuters reported that:

In an unusual step for the sometimes secretive Apple, the company has spoken out about its support for the Pride festival. To help attendees navigate the packed event, the company set up a dedicated LGBT station on iTunes Radio and featured several apps on its App Store, including the Find My Friends app. Company employees also handed out iTunes gift cards to bystanders.

“Apple believes equality and diversity make us stronger, and we’re proud to support our employees and their friends and families in this weekend’s celebration,” Apple spokeswoman Michaela Wilkinson said.

Employees are also handing out $1 iTunes gift cards in celebration.  A ton of Tweets and Instagrams are below and you can follow with hashtags #pride, #ApplePride and #SFPride:

END_OF_DOCUMENT_TOKEN_TO_BE_REPLACED

Apple has invited its employees through an internal memo to participate and represent the company together next month at San Francisco’s annual LGBT pride parade. Apple will host a base camp for registered attendees made up of Apple employees and their families and will supply entertainment and breakfast as well as T-shirts for participants. This year’s Pride Celebration and Parade marks the 44th annual gathering and has been host to the likes of Apple, Google, and Facebook (including CEO Mark Zuckerberg) in recent years. END_OF_DOCUMENT_TOKEN_TO_BE_REPLACED