One 'Program Enrollment and Renewals' story August 2013
See All Stories

All Developer Center services back online, members receiving one month extension for downtime 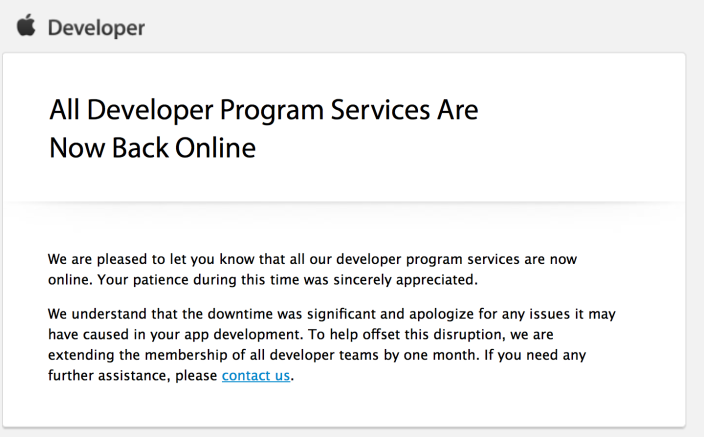 Apple has been slowly restoring various services and overhauling its Developer Center since the company shut down all services to investigate an attempted breach into the system late last month. After outlining its plan to restore remaining services earlier this week, today the few developer services that remained down are now back online. That includes the Member Center, Program Enrollment and Renewals, and Technical Support. In addition, Apple has extended all developer memberships by one month as a result of the service interruption.

Following the security threat last month, Apple said it would work to completely overhaul its developer services, including “updating our server software, and rebuilding our entire database.” Since confirming the security issue and shutting down the developer center, it’s taken the company just over 3 weeks to rebuild its developer system and restore all services.

Apple provided extensions for developer memberships set to expire during the outages, and also launched a new System Status page for developers that shows the status of each developer service.

Here is the email that was sent out to developers: END_OF_DOCUMENT_TOKEN_TO_BE_REPLACED