Motorola outs the new RAZR, beats the iPhone 4S on thinness (except the part that doesn’t) 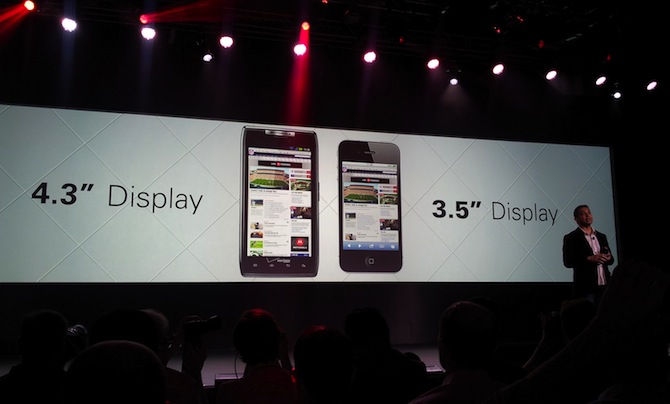 Motorola teaches us the difference between the 3.5-inch iPhone 4S and 4.3-inch RAZR.

Motorola has just unveiled the DROID RAZR and it looks like it beat the iPhone in the thinness department (except the upper part housing the camera that isn’t). Motorola’s device is, according to the blurb, “impossibly thin”, measuring just 7.1mm versus 9.3mm for the iPhone 4S. This 4G LTE handset driven by Android 2.3.5 features a 4.3-inch Super AMOLED display with an qHD resolution, a 1.2GHz dual-core processor with 1GB of RAM plus an eight-megapixel camera with 1080p video recording, 32 gigabytes of storage and Bluetooth 4.0.  It weights a slight 121 grams compared to the iPhone 4S’s 140 grams.

But 7.1mm thin?  Sure, except the part that is 10mm thin housing the camera.

They also have an optional lapdock that looks a lot like a MacBook Pro. The physical design boasts an interesting combination of Gorilla Glass and KEVLAR. Motorola is claiming up to 8.9 hours of video playback and 12.5 hours of talk time. The device is available for pre-order beginning October 27 on the Verizon Wireless network, starting at $299, with an expected launch sometime in November. Our own Seth Weintraub is live-blogging the announcement over at 9to5Google so feel free to hop over if you’re eager to find out more or check out the official RAZR mini-site. More juicy press shots, a nice teaser video and full press release after the break… 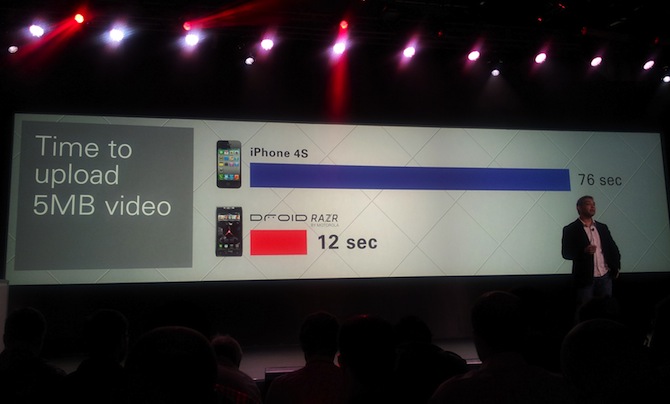