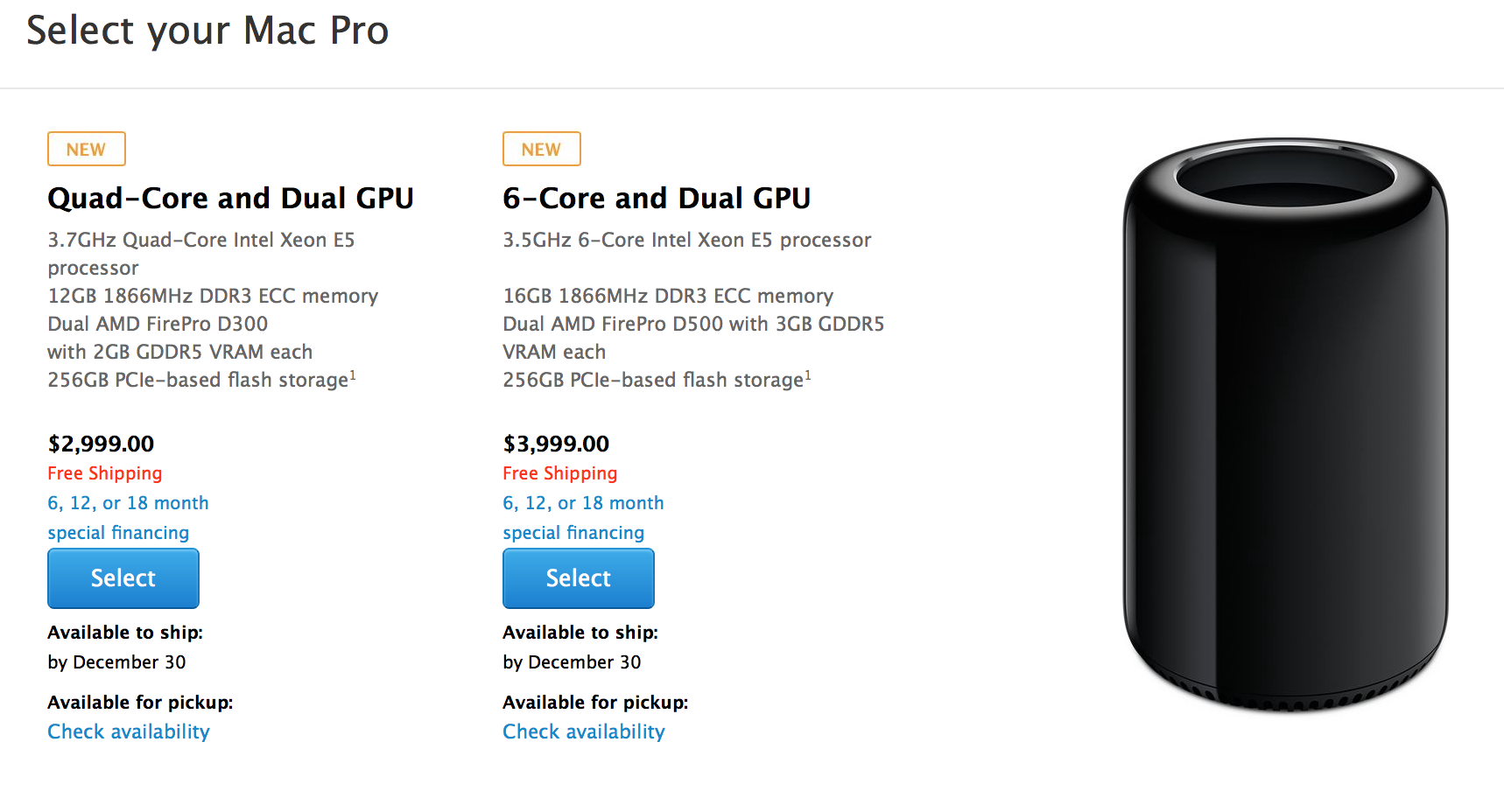 During this year’s WWDC keynote address, Apple surprised pro users with a look at a completely redesigned version of the Mac Pro, a machine many thought had long been abandoned by the company. At the time, the only availability information that was available was an ambiguous “shipping by December,” though Apple recently gave a more specific release date: today.

After about an hour of downtime, the Apple Online Store has come back up with the option to order the latest-generation Mac Pro. The quad-core model starts at $2,999, with a 6-core model available starting at $3,999.

END_OF_DOCUMENT_TOKEN_TO_BE_REPLACED 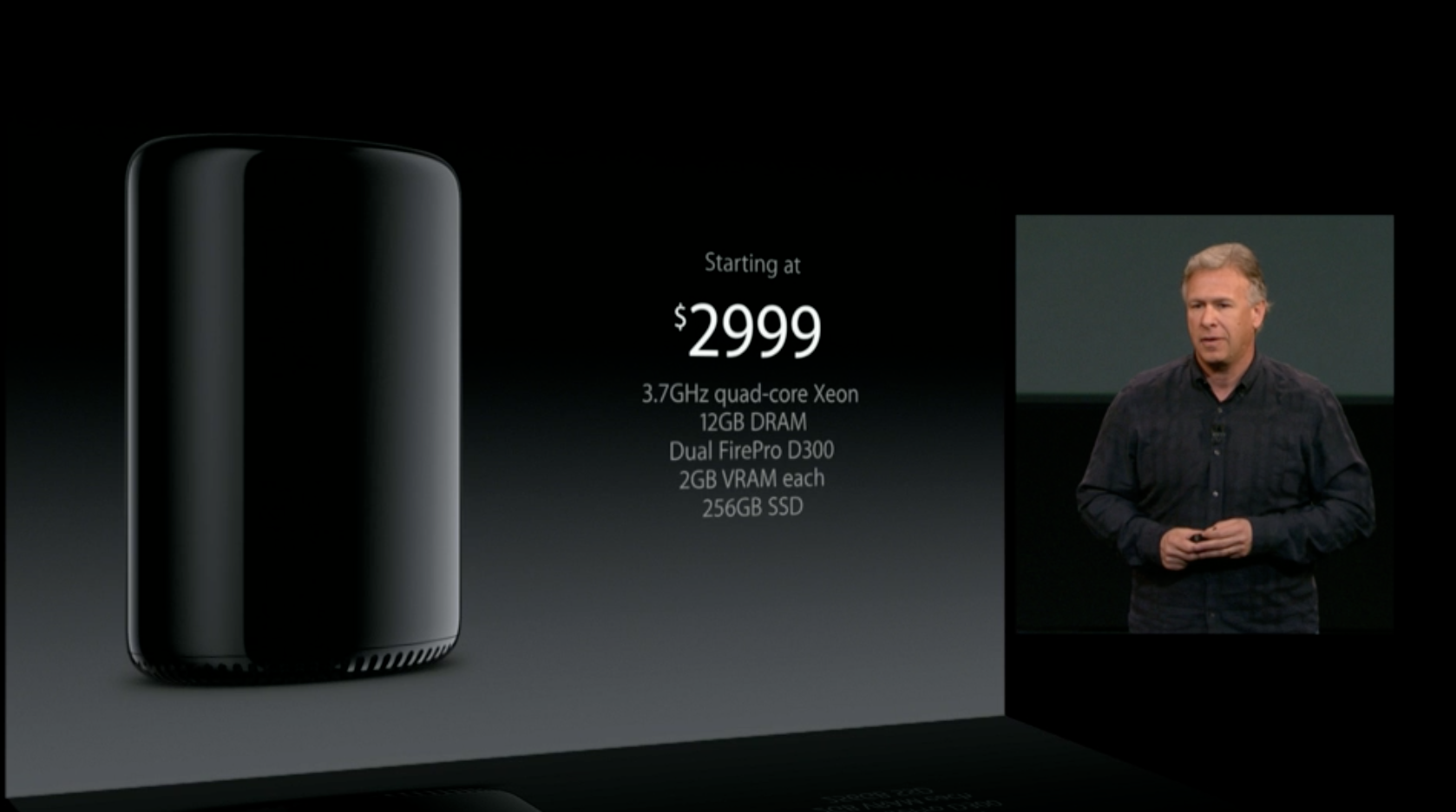 After first unveiling the completely redesigned Mac Pro at WWDC earlier this year, Apple today gave the new machine a bit of stage time at its iPad event to announce pricing and availability details. The base model of the new Mac Pro (pictured above) will start at $2999 and ship by the end of the year.

While Apple will presumably have several configurations and built to order options available for the next-gen Mac Pro– including Quad 6, 8, or 12-core designs– it only announced base pricing for the configuration above. That model includes a 3.7GHz quad-core Xeon processor, 12GB of DRAM, Dual FirePro D300 graphics, 2GB VRAM each, and a 256GB 22D.

Apple is also listing a $3999 configuration on its online store that comes with a 6-core 3.5GHz Intel Xeon E5 processor, 16GB DDR3 ECC memory (configurable up to 32GB), and Dual AMD FirePro D500 with 3GB GDDR5 VRAM each.

Apple also mentioned on stage that it has new versions of Final Cut Pro and Aperture that support 4k and other features of the new Mac Pro while presenting first impressions from professionals that have been using the new machine.

The new Mac Pro features an all-new cylinder design that is 1/8th the volume of previous generation Mac Pros and also packs in some impressive specs that Apple’s Phil Schiller walked through today on stage (gallery below).  The new machine includes the latest Xeon processors in Quad 6, 8, or 12-core configurations, dual station FirePro GPUs with up to 12GB of GDDR5 VRAM, 4K video support, PCIe-based flash, ECC memory, and six Thunderbolt 2 ports.

Other specs include HDMI, Bluetooth 4.0, 802.11ac WiFi, up to 1TB of flash storage, and a motion sensor that lights up I/O when picking up the Mac Pro.

Apple also noted today that it aimed to have the new Mac Pro as quite as the current Mac Mini and was able to achieve that goal.

The new Mac Pro will be assembled in the USA as part of Apple’s plan to bring manufacturing of some of its Macs back to the U.S. this year. (Full press release below) END_OF_DOCUMENT_TOKEN_TO_BE_REPLACED

Chinese Economic News Service (via MacRumors) is citing Citigroup Global Markets analyst J.T. Hsu today as claiming Apple will make the switch to TSMC’s 20nm process for quad-core processors over the next couple of years. The rumor is something we have heard several times in the past:

Citigroup Global Markets Inc. estimated Taiwan Semiconductor Manufacturing Co. (TSMC) to be the only supplier of 20nm process to Apple quad-core processors over the next one to two years, citing the company’s unmatched technological advance on 20nm process and Apple’s decision to adopt 20nm quad-core processors in its new products…Apple began verifying TSMC’s 20nm process in August this year and may begin risk production in November with the process. Volume production is expected to start in the fourth quarter of 2013, raising the possibility that TSMC will hike capital expenditure to US$11-12 billion in 2013 and 2014.

According to Hsu, Apple will utilize the processors in iPad, “iTV” (Apple TV?), and MacBooks, while iPhone’s will remain with duo-core chips:

Hsu estimated Apple to design quad-core processors into iPad, iTV and even Macbook. iPhones will be still powered by duo-core processors to highlight its low power consumption merit… Apple’s contracts have been widely criticized for low margin to contract suppliers, likely the reason why TSMC has been reluctant to compete for Apple contracts. But Hsu thinks otherwise, estimating Apple’s quad-core chip, cost at around US$15, could be 10% cheaper once it is made by Taiwan’s supply chains involving TSMC, Advanced Semiconductor Engineering Inc. (ASE), and Kinsus Interconnect Technology Corp.,

In August, Bloomberg reported both Apple and Qualcomm failed to obtain exclusive chip production rights from TSMC after putting up over $1 billion in bids. Samsung also recently made big investments in its new Austin, Texas plant manufacturing chips for iPhone, iPad, and other Apple products, indicating multi-year contracts are likely in place.

The next Macs will likely have one of these Intel Ivy Bridge processors, due in a month

We have heard reports in recent months that the launch of Intel’s Ivy Bridge processor lineup, which will likely find its way into next-generation Apple products, has been delayed. While an April/May launch was expected for some of the lineup initially, Intel confirmed in February that the launch would likely be pushed to June. Today, a report from CPU World that cited various sources claimed the Ivy Bridge CPUs, including both desktop and mobile chips, will launch between April 22 and April 28.

END_OF_DOCUMENT_TOKEN_TO_BE_REPLACED

When Apple launched the new iPad on Friday, it did so with a new dual-core A5x processor and quad-core graphics inside. During the product’s unveiling, Vice President of Worldwide Marketing Phil Schiller talked about the new chip noting that it provides four times the performance of Tegra 3. Nvidia was quick to question the slide displayed by Apple onstage (pictured right), which did not provide any specific benchmark data. We now finally have some solid benchmark tests courtesy of Laptop Mag that provide us new insight.

For the benchmark tests, Laptop Mag used an ASUS Eee Pad Transformer Prime, which is powered by Tegra 3, and put it up against the new iPad in GLBenchmark 2.1, Geekbench, and browsers’ benchmarks with Sunspider and Peacekeeper. In its last test (video above), the publication did a side-by-side subjective gaming performance test to try to spot any noticeable differences between the same title running on both devices. Here is what the publication found: