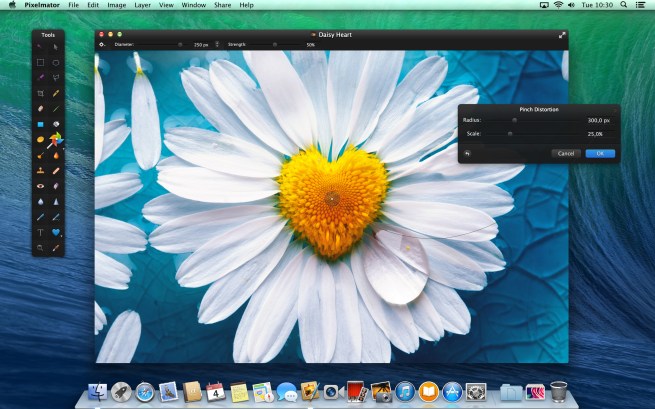 Today, the team behind Pixelmator has released the latest version of their app, version 3.0 FX. As before, the app is available on the Mac App Store for $29.99. The update brings a slew of changes to the already popular image editor, especially considering version 2.2 was only released a few weeks ago. 9to5Mac has had access to a preview copy of the update for a few days … so read on for a full walkthrough of the changes.

The headline feature for Pixelmator 3.0 is the addition of layer styles. Layer styles apply effects such as strokes, fills, shadows and reflections to the entire layer in very few clicks. More importantly, these changes are non-destructive — they affect the layer, not the canvas pixels themselves. This means layer effects can be undone and manipulated without changing the underlying image data. In fact, layer styles can even be copied to the clipboard and duplicated across layers.

END_OF_DOCUMENT_TOKEN_TO_BE_REPLACED

Pixelmator has pushed a point update to the Mac App Store. Despite its minor bump in version number, the update brings a lot of helpful changes. The timing is ‘intriguing’, as it coincides with Adobe’s announcement of a new version of Photoshop Elements from this morning.

Pixelmator quotes a 2x performance improvement when saving documents, as a result of a move to a new file format. For instance, when saving to iCloud, Pixelmator can now push small deltas of what has changed between saves, rather than saving the entire image every time. This speed up is noticeable in use, with projects saving nearly instantaneously on a Retina Macbook Pro.