TweetDeck for Mac gets Regional/City Trends column, other improvements 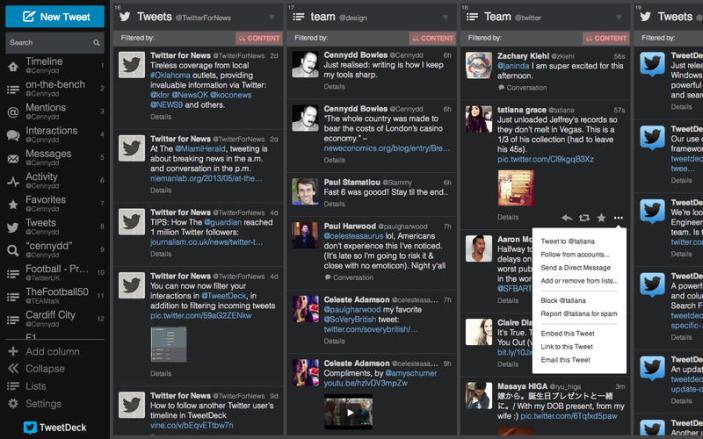 TweetDeck for Mac was updated via the Mac App Store to version 3.8.4 and with it comes a new feature that will show regional and city trends. “You can now find locally trending topics for Regions and Cities, and add a column based on the trend.”

The update also includes a number of other improvements and fixes. You can now remove scheduled tweets from the Scheduled column by removing the time from a tweet and the other update also includes improvements for multiphoto tweets in large columns. In addition, the updated app fixes a few annoyances like the empty columns bug after a computer wakes from sleep as well as retweets with emoji not display properly.

The updated TweetDeck for Mac is available on the Mac App Store now.

– Fixes issue with empty columns after computer wakes from sleep.
– Regional + City level Trends. You can now find locally trending topics for Regions and Cities, and add a column based on the trend.
– Retweeting a Tweet with emoji no longer scrambles Tweet contents
– Removing time from a scheduled tweet now removes that Tweet from the Scheduled column.
– Multiphoto inprovements for large columns Bluegrass Cellular announced today that it is now offering the iPad mini Wi-Fi Cellular models in-store and online. Available on the carrier’s website now starting at the usual $530 for the 16GB model, the carrier is also offering all three models (16GB, 32GB, and 64GB) on its no-contract “Freedom, Expanded” plan. That allows customers to make 12 monthly payments to get the device they want with the ability to trade-in and upgrade to a new device after a year. That plan will run $26.50/month for the 16GB model on Bluegrass, $31.50/month for the $630 32GB model, or $36.50/month for the $730 64GB model. The carrier appears to only have Space Gray models of the device available, at least online, and the Freedom Expanded plans are only available in-store. Another regional carrier, C Spire Wireless, will begin selling the Retina iPad mini over the next week. Update: U.S. Cellular has also begun cellular iPad mini with Retina Display sales today on its website.

In other Retina iPad mini news, we’ve just received word Apple has just started selling the device to walk-in customers in its retail stores following an initial launch for Personal Pickup orders only.

END_OF_DOCUMENT_TOKEN_TO_BE_REPLACED

Earlier this month we told you that lawmakers were working on introducing new legislation to legalize cellphone unlocking following a statement from the White House confirming that it would support “narrow legislative fixes.” The new laws would attempt to reverse a decision was made by the Library of Congress in October to make the act illegal that resulted in a petition from consumers and prompted a response from the White House. We already knew that most of the big carriers including Verizon and AT&T are not in support of unlocking, but today Bloomberg reports smaller, rural carriers are backing new bills in hopes it will attract new iPhone customers:

“Smaller carriers have a very difficult time getting access to smartphones and handsets,” said Steven Berry, president of the Competitive Carriers Association, which represents such companies as U.S. Cellular Corp. (USM) and Bluegrass Cellular. “The unlocking is one way the consumer can make the decision that I can try someone else who has better coverage in the area where I live or play.”

Many of these smaller regional carriers, including Bluegrass Cellular, typically offer the latest iPhone for a price lower than Apple and the major carriers in order to attract customers. Bloomberg also reports that a number of lawmakers have committed to introducing or supporting bills to legalize unlocking phones:

Senate Judiciary Committee Chairman Patrick Leahy, a Vermont Democrat, and Charles Grassley of Iowa, the panel’s top Republican, introduced a bill March 11 to overturn the Library of Congress’s decision and direct the agency to consider adding tablet computers to devices that consumers can unlock.

ChronicUnlocks.com has been a solid provider of iPhone unlocks for our readers and us for a while now if you are looking for a good place to unlock an iPhone