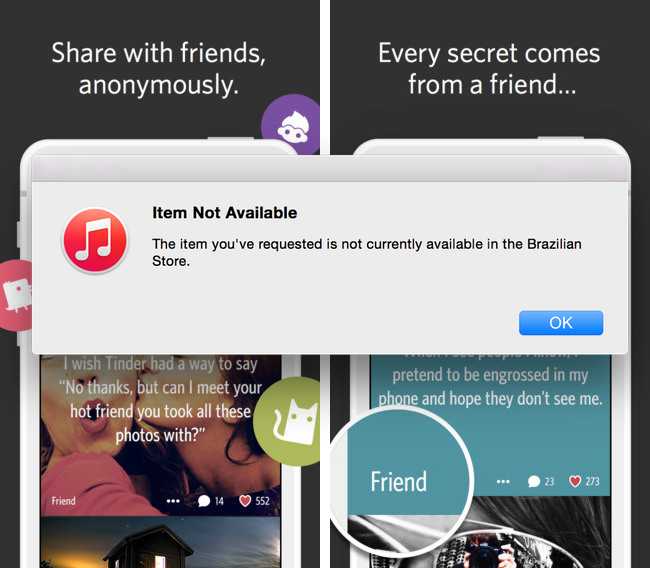 Following a recent ruling that Apple would have ten days to remove the anonymous social app Secret from its Brazilian App Store, Apple has complied with the order. The justification for the removal, according to a source close to the situation, can be found in section 22.1 of the App Store Guidelines:

Apps must comply with all legal requirements in any location where they are made available to users. It is the developer’s obligation to understand and conform to all local laws

As noted by the judge, the Brazilian constitution prohibits anonymous freedom of expression, which essentially makes Secret and other apps like it illegal with that country.

Per Article 5, Section IV of the Constitution of Brazil:

END_OF_DOCUMENT_TOKEN_TO_BE_REPLACED

Following a controversy in which Apple removed app discovery service AppGratis from its App Store for breaking Apple’s guidelines, Reuters reports today that regulators in France are planning to ask the European Commission and EU member states for better regulation of technology companies. The statement was made by French junior minister for digital economy Fleur Pellerin on a recent trip to AppGratis publisher iMediapp. Fleur described Apple’s decision to pull AppGratis as “extremely brutal and unilateral”:

“This behaviour is not worthy of a company of this size,” Pellerin said. She added that certain Internet companies were guilty of “repeated abusive behaviour” and said she would ask the European Commission and EU member states to better regulate digital platforms, search engines and social media.

The decision comes as Apple is drawing some heat for its broad App Store guidelines that have allowed it to remove some apps that promote App Store content but not others. Apple originally said that AppGratis was removed for breaking a guideline that warns against “Apps that display Apps other than your own for purchase or promotion in a manner similar to or confusing with the App Store.” Apple also said AppGratis was in violation of guideline 5.6 that says “apps cannot use Push Notifications to send advertising, promotions, or direct marketing of any kind.

AllThingsD reported that sources have indicated Apple’s removal of AppGratis is part of a broader crackdown on app discovery applications, but a grey area still remains regarding how Apple decides which apps are approved and which are removed.

Apple told Retuers today that it had discussions with AppGratis prior to the removal and that the developers had “disregarded its technical specifications.” END_OF_DOCUMENT_TOKEN_TO_BE_REPLACED