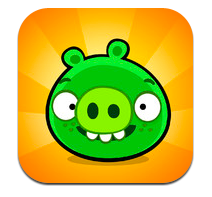 Banking (quite literally) on the success of its popular Angry Birds game, the folks at Rovio have released yet another game on the App Store. This morning, the crew has released Bad Piggies for 99 cents. The game reminds us of Angry Birds; it is described as “the ultimate flying/crawling/rolling/spinning/crashing device and pilot the pigs safely to the eggs” by the app development firm. Rovio listed the features: