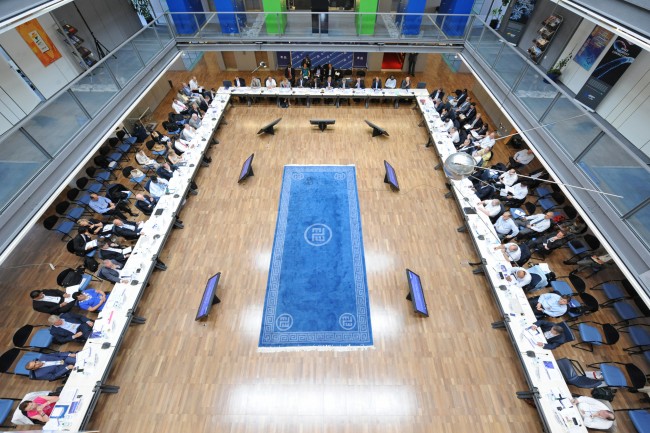 Update: While the meeting apparently didn’t result in any resolution, ZDnet reports the ITU’s Malcolm Johnson said the ‘heated debate’ “has gone a long way to help clarify the positions” of the companies involved:

“Today’s event has gone a long way to help clarify the positions of various stakeholders in determining the effectiveness of FRAND commitments and the impact of litigations surround standards-essential patents,”

“For 20 years the [FRAND] licensing commitments made by innovators in the communications industry have been sufficient,” Warren said. “Past experience would indicate that [FRAND] has been effective… but that doesn’t mean there isn’t room for improvement to improve the present situation.”

The world’s biggest tech companies are meeting today for a Patent Roundtable with the United Nation’s International Telecommunications Union to “assess the effectiveness of RAND (reasonable and non-discriminatory) – based patent policies.” The meeting will take place at the ITU headquarters in Geneva, Switzerland; and according to several reports, it will include Apple, Samsung, Nokia, Google, Microsoft, and many of the industry’s other biggest players. The discussions follow high-profile, patent-related cases and failed settlement talks between Samsung and Apple, while the European Union continues to probe Motorola, Samsung, and others over potential abuse of the patent system. It also comes as Google’s legal chief David Drummond issued statements to the press calling for a reform on software patents.

A report from BBC noted others attending the roundtable include: Qualcomm, Cisco, Research in Motion, Intel, Philips, Huawei, Sony, and Hewlett-Packard. BBC also provided statements from the companies that submitted pre-event arguments (below).

According to the ITU, the meeting will have the following objective: END_OF_DOCUMENT_TOKEN_TO_BE_REPLACED