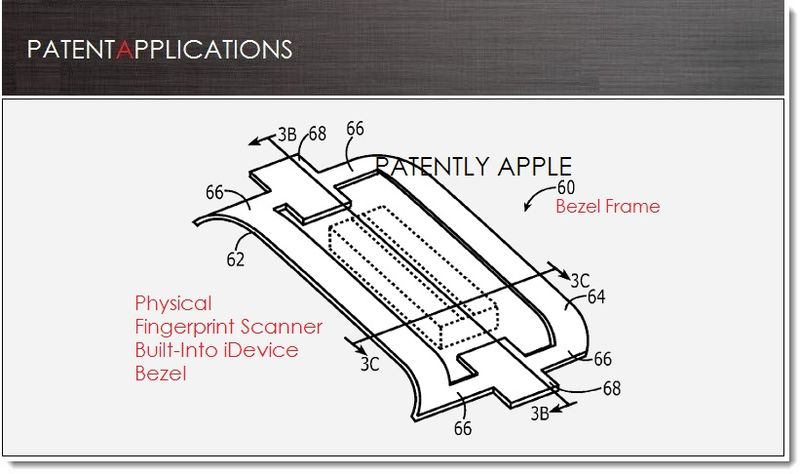 There have been no shortage of fingerprint sensor rumors surfacing since Apple acquired Authentec last year. According to several reports from analysts, including the often reliable Ming-Chi Kuo and the not as reliable Topeka Capital analyst Brian White, Apple’s next-generation iPhone is likely to include a fingerprint sensor. We’ve discussed how it could certainly make a stand out hardware feature for Apple’s expected “S” upgrade, and today the US Patent and Trademark Office published patent applications that show Apple could be experimenting with exactly that (via PatentlyApple).

According to one aspect of the present disclosure, a biometric sensor assembly, such as a fingerprint sensor, comprises a substrate to which is mounted a die containing sensor circuitry and at least one conductive bezel. As used in the description and claims that follow, “bezel” means a unitary, substantially uniformly composed structure, most typically metal or conductive plastic. The die and the bezel are encased in a unitary encapsulation structure to protect those elements from mechanical, electrical, and environmental damage, yet with a portion of a surface of the die and the bezel exposed or at most thinly covered by the encapsulation or other coating material structure 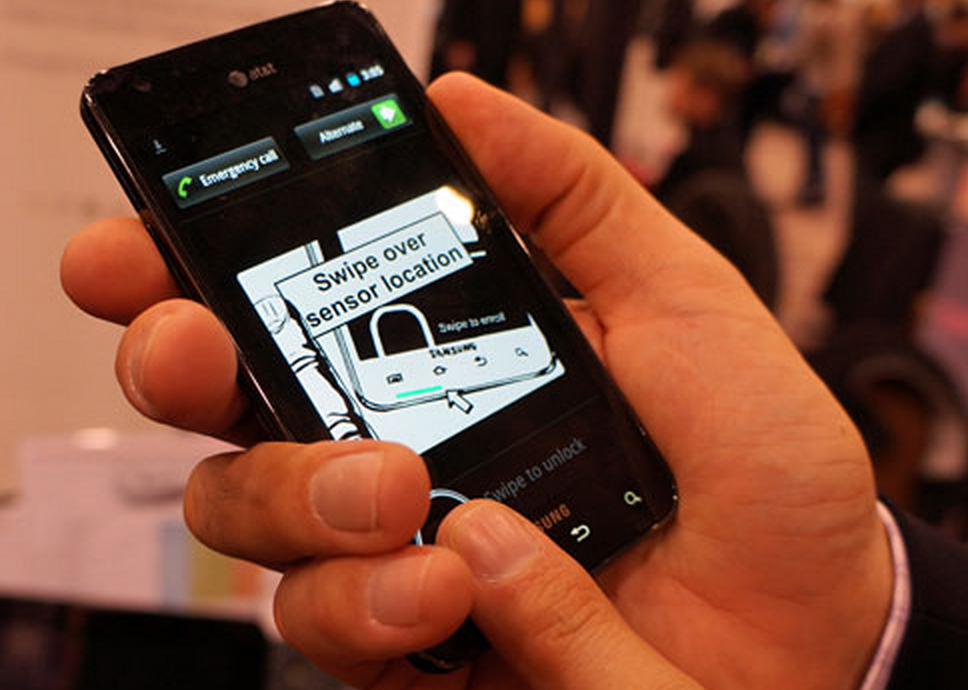 The patent describes a process of embedding a fingerprint sensor into the bezel of a device, which sounds a lot like the finger print sensors Validity was showing off embedded in Android devices at CES this year (pictured right). Apple notes in the patent application that the sensor would be “approximately the width of an average user’s fingertip, but only several pixels tall, typically between 1 and 8 pixels, and possibly as many as 16 pixels tall” when viewed from above.

Apple doesn’t get too into what functions for users the fingerprint sensor would provide, but does note that “the sensor captures a number of thin strips of the fingerprint as the finger is swiped, and the complete fingerprint is assembled in software for use in authentication.” END_OF_DOCUMENT_TOKEN_TO_BE_REPLACED 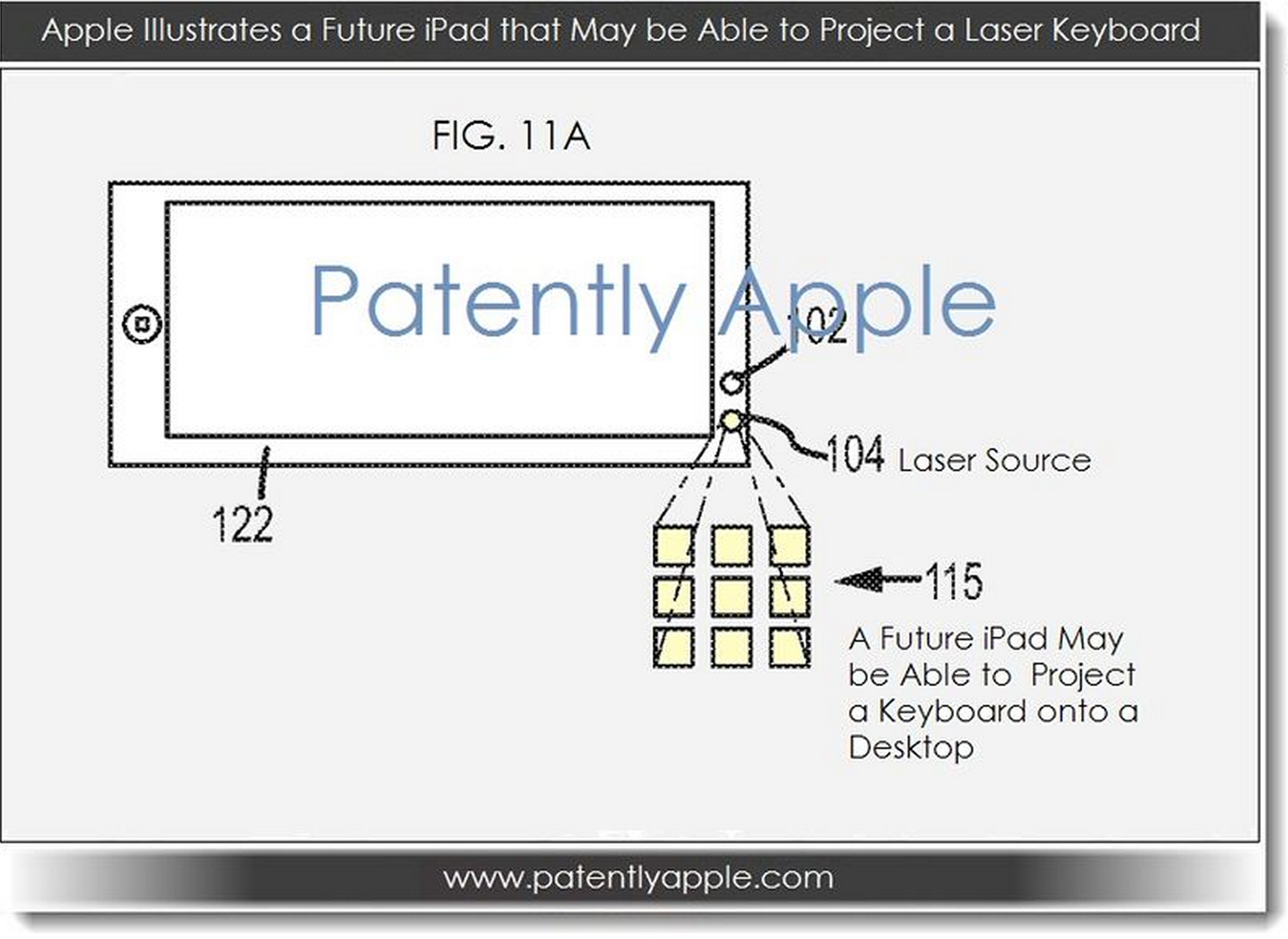 The U.S. Patent and Trademark Office published a couple of interesting patent applications from Apple today. One patent described various embodiments of a depth perception system and laser projection, while another concerned an “ad-hoc cash dispensing network” that would turn iPhone users into walking ATMs.

PatentlyApple first covered the patent and highlighted several possibilities of using cameras and a laser source to determine the distance of an object and implement various applications based on detection of depth. The report explained an embodiment of the invention by describing how Apple could use the system integrated into, for example, an iMac. PatentlyApple also described how Apple could use the invention for laser projected keyboard applications (as pictured above):

In this example, the iMac is able to detect a user approaching it and activate a particular program, application, awake from sleep or power save mode, and the like… In patent FIG. 12, we see a user positioned in front of this future iMac such that the first and second beams 206a, 206b may at least partially intersect the user. The iMac’s updated iSight Camera will be able to determine the distance that the user is from iMac. The depth perception system increases the sensitivity of user detection for the iMac so that it could make a distinction between the user and an occupied chair… In Apple’s patent FIG. 11A shown below, we see the depth perception system incorporated into a mobile electronic device such as an iPad. In this example, the system may be used in combination with a projected control panel 115 (such as a keyboard, audio/video controls, and so on). The control panel 115 may be a light pattern projected from a light source onto a surface (e.g., table or desk), the control panel 115 may include different light shapes, colors, or the like for representing different inputs.

Unwiredview.com pointed us to the “ad-hoc cash dispensing network” patent published today and recently filed by Apple that would essentially allow iOS users to become ATMs for other iPhone users. Just imagine being able to withdraw cash when there simply isn’t an ATM or bank nearby. Apple’s system would allow other close by iPhone users to lend you cash, with the borrowed money returned to the lender through your iTunes account/credit card for a small fee (as pictured in the patent drawing below): END_OF_DOCUMENT_TOKEN_TO_BE_REPLACED 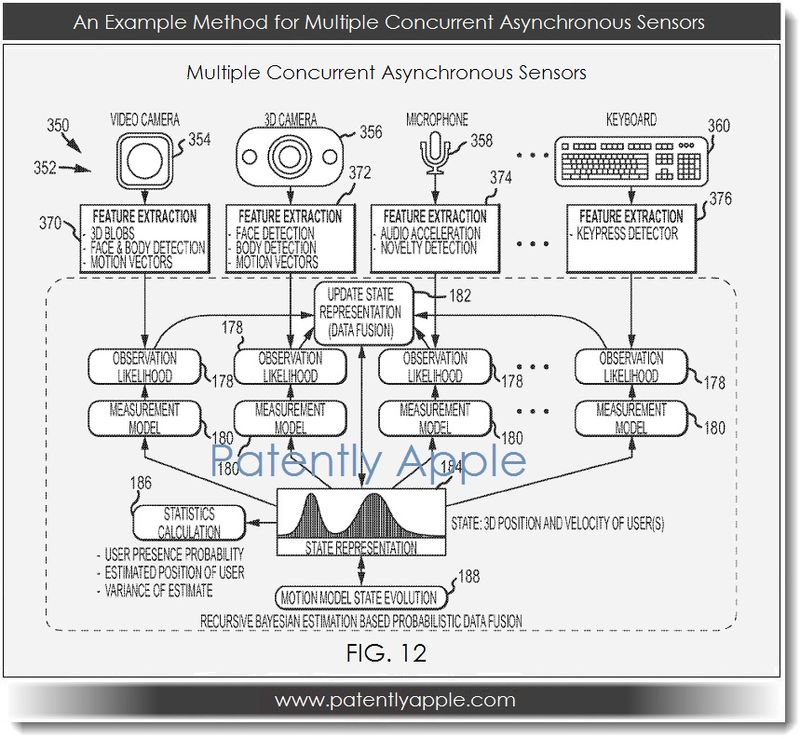 The U.S. Patent and Trademark Office published a patent application from Apple today that covers various methods of detecting a user’s presence and augmenting the user experience accordingly. Apple has covered face recognition and presence detection systems in various patent applications in the past, notably for multi-user logins, security features, and an Android-like face unlock feature. Today’s patent application covers even more implementations of Apple’s presence detection technology that would utilize ultrasonic sensors, microwave radar, and camera and audio systems to detect and identify the user. PatentlyApple covered the highlights of the patent including the ability to activate or augment features using presence detection:

In some embodiments, the device may also be configured to track the user movements (e.g., position and velocity) and, in response to certain movements, provide feedback and/or enter or change a state of operation. For example, movement toward the device may activate more features, such as providing more options/menus in a user interface, whereas movement away from the device may reduce the number of features available to a user, such as reducing the number of menus/options and/or reducing or increasing the size of the options displayed.

PatentlyApple also described another interesting possible implementation that would allow for intelligent zooming based on the movement of the user: END_OF_DOCUMENT_TOKEN_TO_BE_REPLACED 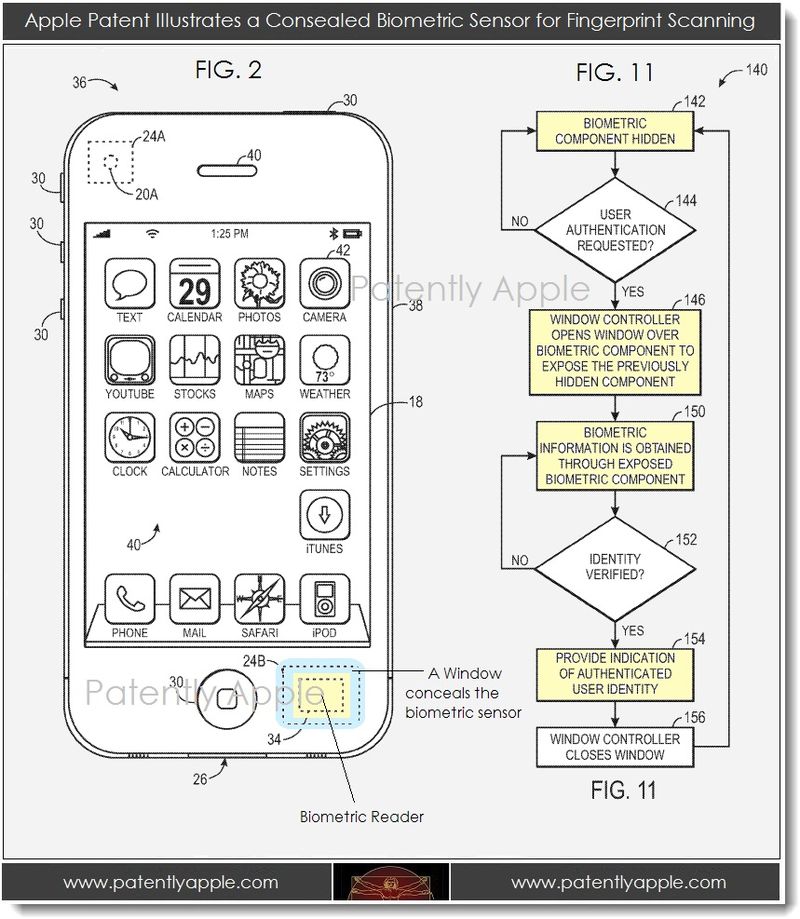 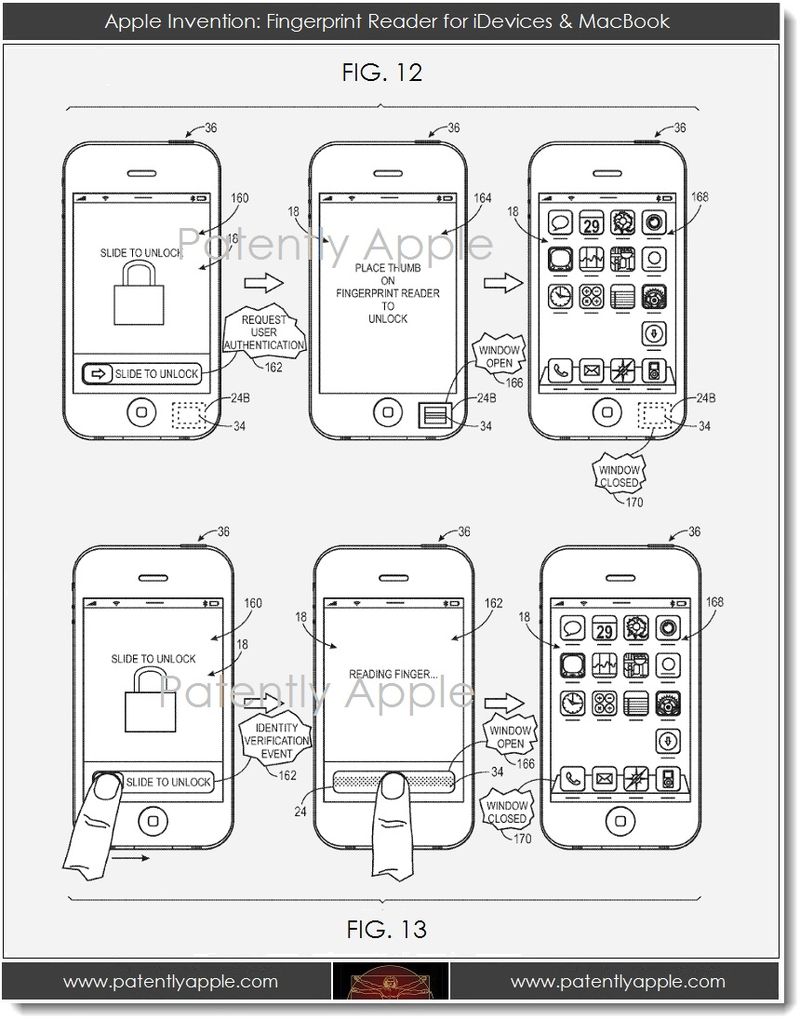 With Apple’s $356 million purchase of mobile security firm AuthenTec, for its nearly 200 patents covering fingerprint and sensor technologies, there has been a lot of talk about how Apple might integrate the technology into future devices. Adding to the rumors are recent reports that Apple signed a deal with Sydney, Australia-based Microlatch to develop NFC apps using its fingerprint authentication tech. Today, we get a look at some possible areas Apple might be exploring with the technology thanks to a patent application published by the U.S. Patent and Trademark Office and detailed by Patently Apple.

As highlighted in the image above, Apple’s patent covers a hidden color-matched or transparent “window”—next to the iPhone’s home button in this case—that could reveal “components by causing the electronic window to change opacity, allowing the components to suddenly appear as from out of nowhere.” In other words, Apple could build a biometric sensor or camera into a device’s bezel but have it remain invisible to the user—at least when not in use. One embodiment of the invention described using fingerprint tech during the unlocking process (pictured right):

In Apple’s patent FIGS. 12 and 13 shown below we see a biometric sensor in context with a fingerprint reader which is initially concealed behind a closed window on an iPhone. Upon the iPhone’s activation in a locked state, a lock screen 160 may be displayed requesting a user to slide a finger across the display to unlock the device. The electronic device may request user authentication to access the handheld device. The device may then display an instruction screen requesting that a user provide biometric data via their fingerprint which will be read by the fingerprint reader.

The patent also covers similar methods using face recognition and eye recognition rather than fingerprint sensors; the invention would also not be limited to unlocking devices. The patent continued by describing e-commerce and wallet applications, which would line up with the earlier reports regarding Microlatch: END_OF_DOCUMENT_TOKEN_TO_BE_REPLACED 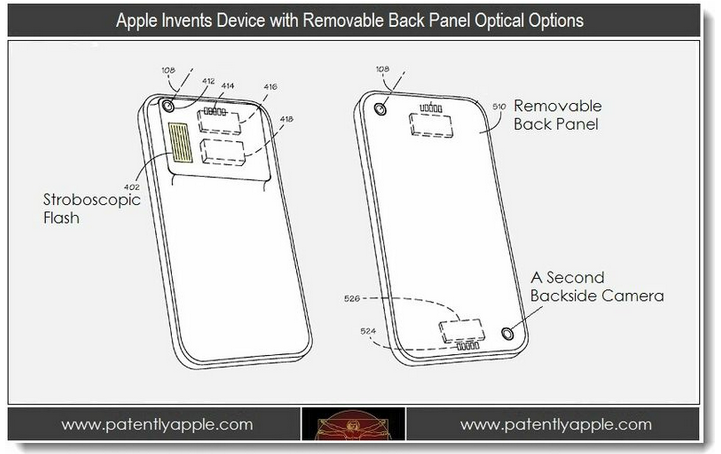 According to an Apple patent application published by the U.S. Patent and Trademark Office and detailed by PatentlyApple, Apple is at the very least conceptualizing a device that sports a removable back panel for easily replaceable components such as lenses or optical solutions.

While it is unclear whether the invention would be used in a standalone camera, next-generation iPod or iPhone, or a different device entirely, the patent detailed several methods of upgrading a device with supplementary optics:

Apple detailed several features that could be added through the easily swappable supplementary optics, including: improved zoom capabilities, better shutter control, removable close-up lenses, and the addition of motion sensors, flashes, or a lens baffle. As an example, the report explained a removable IR cut-off filter that would allow “capturing black and white images at very low light levels. Without the IR-cut filter the camera’s light sensitivity may extend to 0.001 lux or lower.” The report also broke down how the removable back panels could be implemented:

END_OF_DOCUMENT_TOKEN_TO_BE_REPLACED

A patent application published by the U.S. Patent & Trademark Office earlier today reveals Apple is flirting with the idea of a universal touchscreen controller capable of controlling multiple devices including a “television, a video tape player, a video disk player, a stereo, a home control system, or a computer system.” The patent application is titled “Apparatus and Method to Facilitate Universal Remote Control” and was filed Sept. 30, 2011.

The patent application’s background covers many of the issues with current controllers for televisions and the devices mentioned above. It noted current universal remotes are “complex to operate” and unable to adapt to incorporate every command or control functionality supported by a device or future device. It also mentions the fact that users are often “confronted with multiple” remotes, which is the classic “table full of remotes” scenario described by Steve Jobs when talking about the Apple TV at D8. The patent application explained: