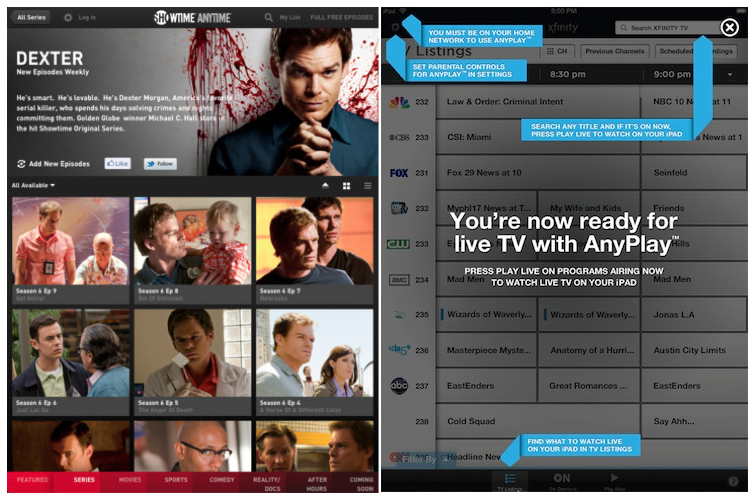 In September, leaked documents emerged revealing Comcast was working on a live TV streaming service for iPad called “AnyPlay“ and now the company announced the service will roll out today. To start out, AnyPlay will only be available to Xfinity HD Triple Play subscribers located in Denver and Nashville, but the company plans to roll out to additional markets “in the coming months”.

The service will be accessible through the current Xfinity TV app. Comcast revealed exactly how it works:

the AnyPlay device works the same as any other set top box in the home, but instead of delivering the incoming channel lineup to a television, AnyPlay delivers the lineup to the Wi-Fi router on the home network. The router then distributes the secure video signal to the iPad or Xoom over your home’s wireless network. So as long as your tablet is within range of the home wireless router, you can turn it into another television screen.

In related iPad video streaming news, Showtime announced the Showtime Anytime iPad app today that brings Showtime Anytime subscribers over 400 hours of content. The app appears to only be available to AT&T U-Verse and Verizon FiOS customers, but the press release does mention Comcast support “will be launched soon” and others will be added in the future.

Some of the content accessible form the app includes TV shows “Dexter,” “The Big C,” “House of Lies,” and movies “The King’s Speech,” “The Hurt Locker,” and “Inglorious Basterds.”  The company plans to launch an iPhone app for Showtime Anytime sometime early this year.