Google Plus (iTunes) iOS users will see a big update in their App Store today with lots of new features and improvements that were detailed earlier this week. Most notable is the ability to start and join video hangouts from a mobile device. In brief testing on both an iPhone 4 and an Android device on Wi-Fi, the Video conferencing worked great. It should work over 3 or 4G but the results obviously won’t be as good. Also, this version changes Huddles to Messenger and you can now send picture files through the messenger application.

END_OF_DOCUMENT_TOKEN_TO_BE_REPLACED

Skype 5.2 for Mac hits, will we have to wait until tomorrow for iPad version?

Skype dropped a new Mac Client on us today, a day ahead of the Super “Awesome” Facebook announcement that is rumored to include Skype.  New featurefor the unpaid version include “super awesome” background video chatting control bar.  Pony up a few bucks and get yourself up to Windows level (they got a head start on Microsoft tactics!) with Group video conferencing that looks and acts nothing like Apple’s built in iChat group teleconferencing (this was in 5.1Beta as well).  Also, screen and document sharing.

The Windows version – just to make sure it is one step ahead of the Mac version – got Facebook integration with the 5.5 update.

If you aren’t still at the standard 2.8 like us, have a look at the tips and tricks to see if you’re a good update candidate (we’re staying put).

We were pretty stoked two weeks ago to see the iPad version demoed only to have Skype go silent on the product last week.  We’re thinking it might be happening at the Facebook introduction on Wednesday….about the same time as the Google Plus App hits.  Via TechCrunch END_OF_DOCUMENT_TOKEN_TO_BE_REPLACED 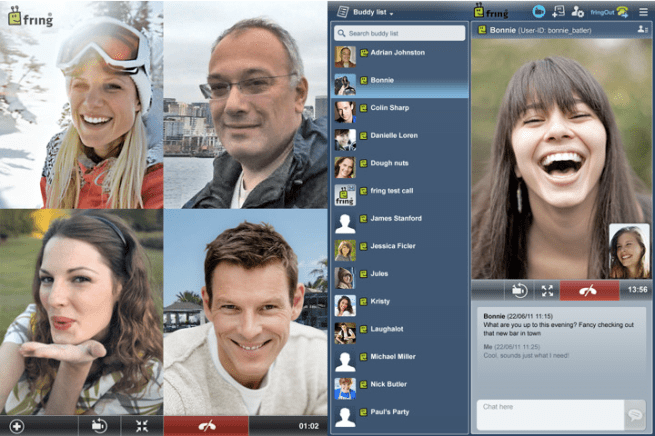 We’re expecting Skype’s iPad client at any moment now, but old Skype collaborator and new foe Fring already has lept ahead with the ability to video conference between four people, right in the iPad 2 window, at the same time.

Skype ratchets it up a notch, advertises Verizon iPhone. iPad version too 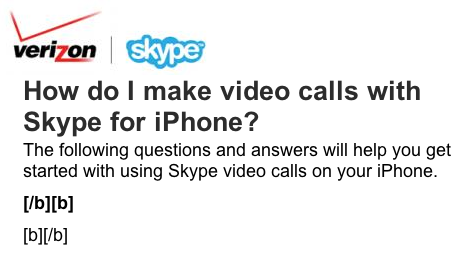 Ever get the feeling that these companies like to mess with us?  After the reported Skype iPhone video conferencing ‘leaked help document’ Skype took the document offline.  Today however, it is back up with some new company joining in the fun:

So there you have it: Skype, Verizon, iPhone.  CES. Join us for coverage on Jan 6th.

Also, Skype is hyping an iPad only version of their software as well.

Even though the iPhone application is fully compatible with the iPad, we’re still always striving to bring the best to our Skype users, which is why we’re developing a Skype application designed specifically for the iPad. Watch the website for further updates.