Skype rolled out a major redesign from the ground up to its iPhone app last month with feature improvements like in-app banner notifications and greatly improved message statuses across versions of the software, but regular Skype users were quick to note that the update initially lacked support for voice messages. Voice messages simply could not be accessed from the iPhone version. When Skype released version 5.1 quickly after the initial launch, users voiced more concerns that the feature was still absent with the only solution being to access voice messages on another platform using Skype.

Today in a blog post, Microsoft has announced that Skype 5.2 adds the useful feature back to the iPhone version of the app with voice messages showing up in line from other users. In addition to voice message support returning, the latest version also adds a new way to view contact information and add contacts into existing message threads. END_OF_DOCUMENT_TOKEN_TO_BE_REPLACED 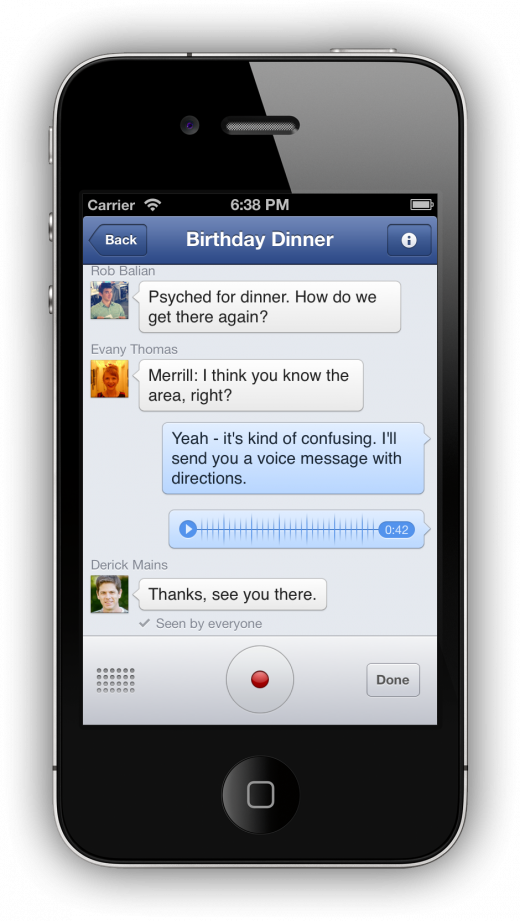 Facebook is updating its Messenger iOS and Android app today with a couple of really interesting new features: the ability to record short voice messages, and a free calling service that utilizes users’ existing data plans but not their call allowance. Facebook noted on the app’s iTunes page that the calling service will roll out in the next few weeks, while the other features appear to be available to users today.

The new voice message feature will allow all users to record a voice message through a new record button (pictured above), but The Next Web explained Facebook is limiting the new VoIP calling feature to Canadian users initially. The app isn’t live on the U.S. store, but it has already landed in Canada and should be available everywhere soon.

To use the service, Canadian users will be able to log into their Messenger app, open a conversation with the person they want to call, hit the ‘i’ button in the top-right corner and selecting ‘Free Call.’ To send and receive calls, users will need to have the latest version of the app that is available today. END_OF_DOCUMENT_TOKEN_TO_BE_REPLACED