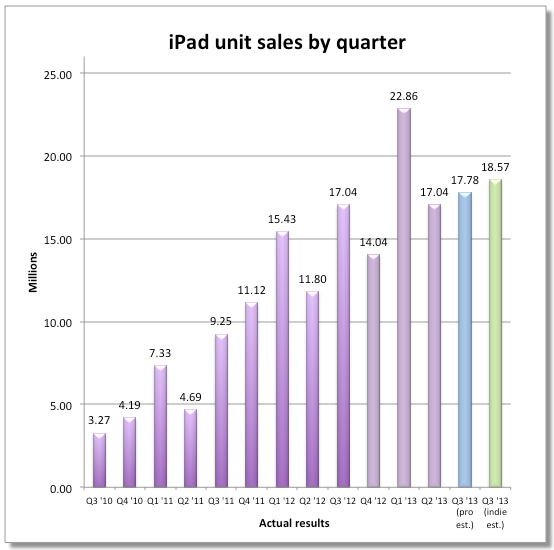 With Apple’s Q3 2013 financial call set to take place later this month on July 23rd and Wall Street expecting near zero revenue growth, today we get a look at what analysts are expecting for iPad sales. With no major product announcements since the  introduction of iPad mini and iPad 4 last fall (and only a minor upgrade with the 128GB iPad 4 in January), it’s not all that surprising the consensus from 48 analysts polled by Fortune is that Apple will experience a big drop in growth year-over-year for iPad during the June quarter.

The average estimate of 18.1 million iPad units during Q3 works out to around 6.2% growth compared to 183% and 84% in Q3 2011 and Q2 2012, which some might still consider significant due to the lack of new product announcements and competition from Android tablets: END_OF_DOCUMENT_TOKEN_TO_BE_REPLACED