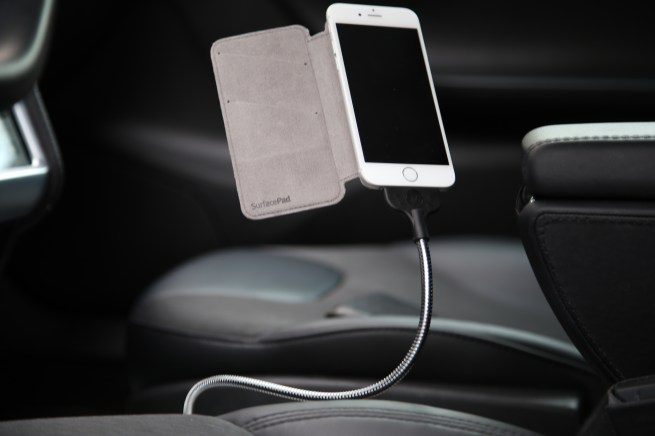 There are a lot of options for mounting your iPhone in your car. I’ve relied on the highly-rated Kensington suction cup windshield car mount for a few years without too much incident. However, I’ve never been too pleased about how it blocks a bit of my driving view and requires a non-elegant wire to go up my dashboard.

The New Trent Travelpak 4000mAh plug in adapter makes a handy replacement to your iOS device AC USB adapter. I’ve been using the Travelpak 4000mAhfor about 3 months now and find it to be the perfect travelling companion for my phones, tablets and other USB-charged devices. At 4000mAh, you’ll get about 2 full iPhone charges. At 5V/2A, you’ll also get a speedy charge on your iPad, though not as fast as possible. For those focusing on iPad charging, there are bigger versions that come in the 7000mAh and 11200mAh sizes. In fact, the bigger 6000mAh has more ports, a more convenient form factor, and costs less ($39.99). Need more than that? Time for some Hyperjuice.

What’s nice here is that the portable Travelpak can charge two USB devices at the same time while plugged in. It has a nice bright 5 bar light system telling you if it is charging or how much charge it has left (making it a night-light as well). What’s even nicer and contrasts from other plug/batteries is that it turns off when unplugged and only starts charging again when you hit the power button on the side.  Where typical generic AC USB batteries will drain unless they are powered down, these will automatically turn off.

On the down side, when the plug is extended, the 4000mAh version can cover up the other plugs in a wall outlet or surge protector making this aspect of the design puzzling. Still, the other plusses far outweigh this technical oversight. It appears that the new high end 6000mAh and 11200mAh form factor fixes this issue and at a cheaper price, it is hard not to recommend this version.

The Travelpak  is currently $41.54 at Amazon off the List Price of $79.95 for the 4000mAh version that I tried, but it would appear that the larger 6000mAh version at $39.99 might be the better deal, especially since it adds a MicroUSB port and doesn’t cover up an additional plug.