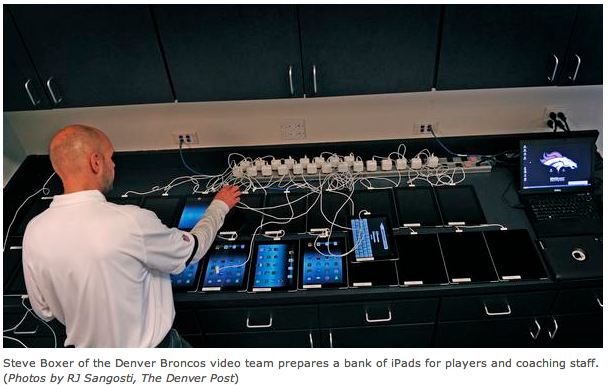 While the Phoenix Suns decided earlier this month to purchase Samsung’s Galaxy Tab for interactive playbooks, a report from Denver Post this morning detailed the Denver Bronco’s decision to switch its 500-page playbooks to iPad versions.

This season, the team will hand out iPads that feature the week’s game plan, scouting reports, video clips and other relevant data… A key component to the software is that it runs in the background even when a player is not reviewing the playbook, enabling the app to determine when a coach has an update to push to players, such as a new short-yardage and goal-line package… When a player isn’t connected to Wi-Fi, the app will update using the iPad’s high-speed connection on Verizon’s LTE network.

How long until the quarterback’s wrist playbook is an iPhone?