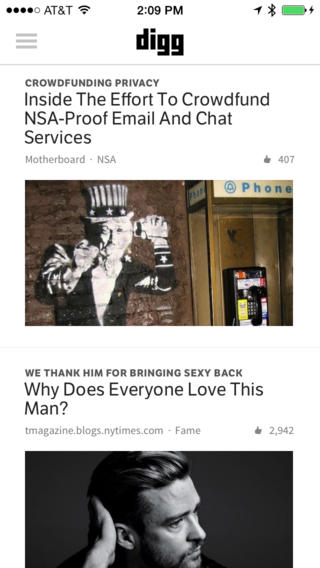 The Digg iOS client has been updated today to version 5.2.1 and with it comes full support for iOS 7 in addition to the usual performance enhancements and bug fixes.

While the design of the app hasn’t been dramatically overhauled like many others, the update brings a few new features made possible by iOS 7. Among them is support for Apple’s new Dynamic Type and Background App Refresh features.

Digg version 5.2.1 is available for iPhone and iPad on the App Store now.

Early Tuesday morning, Google Reader finally closed its doors, but not without a plethora of alternatives launching. We’ve covered all sorts of them before, including Feedly, Digg Reader, AOL Reader, and much more. One of the most popular RSS apps for iOS is Reeder, and it has been updated to support some of those alternatives. END_OF_DOCUMENT_TOKEN_TO_BE_REPLACED

After launching a private beta of its new Google Reader replacement, Digg announced today that it is now rolling out the beta to all users signed up to test the new app. Digg just sent out the first batch of invites to the new web app, but promises it will be “adding users in increasingly larger batches.”

The app is still a work in progress and won’t get you every feature you might have had with Google Reader, but for now you can easily import your Google Reader content, use Google Reader-like shortcuts, and save and share to all the usual third-party services.

iOS versions of Digg Reader land for iPhone and iPad in the App Store sometime today, and Digg says an Android app will be available before the end of July.

Digg warns that the app is still very much in beta, but reminds us of a few features it plans to add in the coming months:

END_OF_DOCUMENT_TOKEN_TO_BE_REPLACED

On top of introducing a dedicated iPad app, Digg released a big update to its iPhone app that includes a new “Reading Sync” feature, which allows you to pick up reading where you stopped on any device, and support for the iPhone 5. Version 3.1 also packs the following new features and improvements (which are also included in the new iPad app):

When we relaunched Digg last month, we said that we wanted to build an experience that is native to each device. The tablet is quickly becoming an important device for Digg users, and the iPad is leading the way, at nearly 30% of mobile visits to digg.com.

◆ Introducing Digg for iPad!
◆ “Reading Sync” — close the Digg app before you could finish a story? The next time you open Digg on your iPhone or iPad, you’ll pick up where you left off
◆ Share articles via text (thanks for the request, @flashpunk!)
◆ Improved performance
◆ Simplified navigation