Nuance has just announced the next major version of its Mac dictation software, Dragon Dictate 4. The new version improves recognition accuracy as well as several new features, including the ability to machine transcribe from a pre-recorded audio file. You no longer have to be recording a voice live to get transcription. 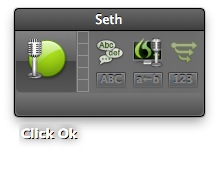 We’ve had a quick play with the software and the accuracy is almost scary good compared to older versions of the software. Speaking in a normal voice gives you almost 100% accuracy and even mumbling seems to work. While Mavericks uses the same Nuance speech engine, Dictate 4 has a better interface for transcription and tons of extra features as outlined in the videos above and below.

Dragon Dictate software has also been updated for modern system architectures — it is a 64-bit app now.  This results in better performance and better memory management over its predecessors. The company says it has drastically reduced latency when interpreting speech.

END_OF_DOCUMENT_TOKEN_TO_BE_REPLACED

StackSocial has a pretty impressive bundle hitting this evening for just $29.99. In it you get 9 solid apps including:
Painter Lite: Ease Into the World of Digital Art
TuneUp: Organize Your iTunes Music Collection in Just a Few Clicks
Disk Drill Pro: Protect and Recover Data Like a Pro
MoneyWiz: Personal Finance For Your Mac
Voila: The Best All-in-One Mac Screencapture Tool
DVDRemaster 8: The Ultimate DVD Re-Encoding Solution
DesktopShelves: Fight Clutter on Your Desktop by Organizing Files on Shelves
MacScan: MacScan is the premier Macintosh security program
NetSpot Pro: The Only App for Wireless Site Survey, Wi-Fi Analysis, & Troubleshooting on Mac OS X

StackSocial also has Dragon Dictate for half off at $99 for both PC and Mac.