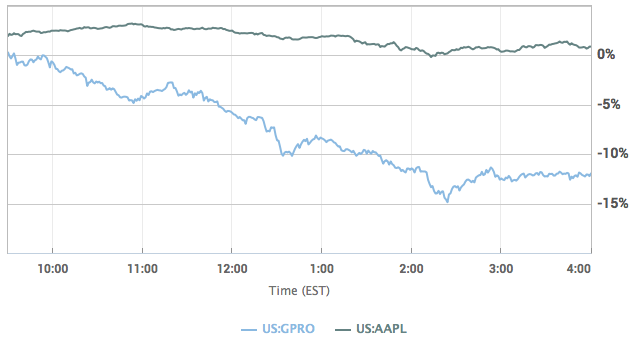 We’ve cautioned many times that Apple patents a huge number of inventions that will never see the light of day. Last year alone, the company was awarded 2,566 ‘utility’ patents–those covering actual technologies, rather than mere designs. The fact that Apple has patented something tells us absolutely nothing about its future product line.

But that didn’t stop traders going crazy yesterday over a patent awarded for a GoPro-like action camera: GoPro shares fell as much as 15% as panicking traders dumped the stock. The ‘thinking’ was that if Apple was entering the action camera market, GoPro was doomed. The slump was so dramatic that it even tripped a Nasdaq safeguard at one point, reports MarketWatch.

It’s even more absurd in this case: not only is the patent one of thousands of things that Apple probably won’t do, it isn’t even an Apple patent in the first place–it was, as Fortune notes in passing, just one of a number of patents acquired by Apple from Kodak.

Yep, if Apple really were moving into a new market, established players would indeed be sweating. But there is precisely zero evidence that Apple has any plans to move into GoPro’s territory.

That’s not to say competition isn’t heating up in the space however. HTC introduced the Re late last year ($99-199) as an iOS and Android connected camera and many others have been joining in starting at much lower prices.

It must be a cold day in Hell. Apple is consorting with Google, Samsung, LG Electronics, and various ventures and firms to bid as a group on Kodak’s intellectual property.

Kodak filed for bankruptcy protection in January, according to The Wall Street Journal, and it is looking to auction its patents to raise money for surviving a Chapter 11 court protection. Kodak could barter all 1,100 digital photography-based patents or end the auction without a deal, as the company announced it would name the winning bidders on Monday but eventually pushed the deadline upon talking with creditors.

Photography and cameras are obviously a main feature of mobile devices. Competitors in the tech arena have joined forces in the past to snatch up attractive patents, but The Wall Street Journal noted it is “unusual for them all to join the same camp.”

Patent law whiz Michael Carrier, of Rutgers University in Camden, said the companies would not suffer antitrust issues if the tech giants commit to licensing on reasonable rates. Otherwise, an action such as dividing the patents without sharing the rights to use them could likely meet legal trouble down the road.

Get the full report at The Wall Street Journal.

END_OF_DOCUMENT_TOKEN_TO_BE_REPLACED

In January of 2010, Kodak sued  Apple and RIM for infringing on their patent to preview photographs. The lawsuit is still going on, but today Wall Street Journal is reporting that Kodak is currently looking to sell 10% of their patent portfolio, which includes the patent Apple and RIM are bring sued for.

The 1,100 patents include patents covering  capturing, storing, organizing and sharing digital image. WSJ credits the sale to Kodak’s loss in profit over the last two quarters.

Chief Executive Antonio Perez has been using Kodak’s intellectual property as a means of funding the company’s long and expensive transformation. In 2008, Mr. Perez put forth a goal to generate between $250 million and $350 million a year from Kodak’s patent portfolio.

Google is fresh off acquiring 1,000 patents from IBM and is likely still in a buying mood as it battles everyone from Oracle to Microsoft to Apple-by-proxy in the courts.  Apple, who outbid Google for the Nortel patent portfolio at $4.5B  is obviously on the offensive.

Kodak’s decision to sell its patents follows a $4.5 billion patent sale by Nortel Networks Corp. Kodak has retained Lazard as an adviser for the sale. Lazard also advised Nortel on its sale.