IDC: Samsung ships twice as many phones as Apple in Q2 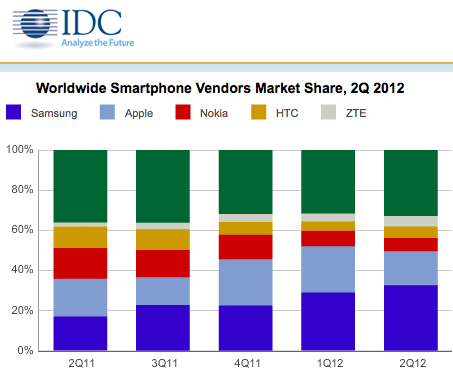 One of the report’s main headliners is that phones are shipping faster than in previous years. About 406 million units shipped in Q2 2012—up from 401.8 million units in Q2 2011. Smartphone shipments also eyed a large year-over-year increase with a 42 percent gain.

The other big news bit concerns Samsung and Apple. The tech giants doubled their combined market share in just two years. Samsung, in particular, hit a new quarterly record after shipping 50 million phones in Q2, where as Apple shipped half as many iPhones during the same time. The Cupertino, Calif.-based Company suffered a quarter-over-quarter decline just six months after its latest iPhone unveiling.