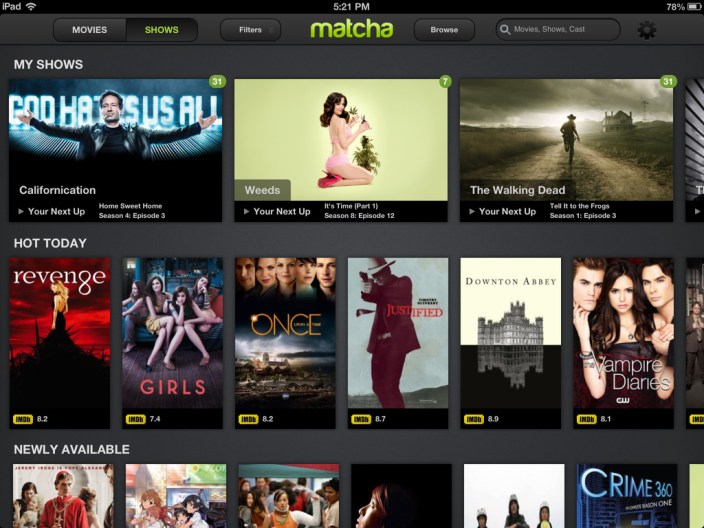 Popular online media aggregation and discovery app for iOS, Matcha, suddenly disappeared from the App Store in late May without any explanation by the company or Apple. Tonight it became clear exactly what happened.

According to Venture Beat, Apple has acquired Matcha.tv for an estimated $1 million to $1.5 million. Although, the final total could be higher once the deal is completed. Unsurprisingly, Matcha.tv CEO Guy Piekarz declined to comment on the potential acquisition and Apple served Venture Beat their typical canned response that “Apple buys smaller technology companies from time to time, and we generally do not discuss our purpose or plans.”

Matcha.tv launched in January of 2012 and steadily grew its fan base by providing an easy way to browse streaming movie and TV shows across all the major sources including Netflix, iTunes, HBO, Hulu, Amazon Prime and others. During its time on the App Store it amassed a favorable 4.5 star rating from iTunes reviewers and was also received well by tech pundits. At first glance this service would seem as a nice way for Apple to fortify a full-fledged Apple TV service or expand their current offering with deeper airplay capabilities and controller integration. Tim Cook has repeatedly said that TV remains an area of “great interest” so it makes sense that they are arming themselves with the resources necessary to take their “hobby” to the next level.

Apple has already successfully completed several strategic acquisitions this year including Passif, a developer of low-power chipsets, and Hopstop, a mapping service.

ZDNet just published a story claiming Apple’s percentage of revenue has “been on the decline for years”. The story claims that percentage is currently 2.2 percent of sales which seems pretty low compared to other technology players (especially when Apple is so innovative). But this isn’t factoring in how items such as a reported $200 […]