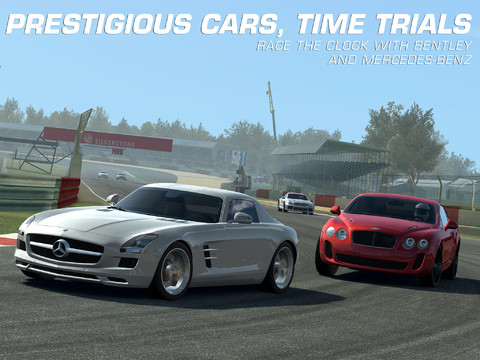 EA updated its popular freemium Real Racing 3 game for iPhone and iPad today with a number of new features including over 55 vehicles from Bentley and Mercedes-Benz. On top of a new Time Trail event type and 180+ new events, EA is also adding a progression system that will allow users to “unlock cars and events as you progress through the new career.” That sounds like a nice addition for those that were complaining of EA’s decision to stick with the freemium model for the title.

Also included in the update is improved graphics with “Per-pixel shadowing on high-end devices” and new bonuses:

• New manufacturers – Bentley and Mercedes-Benz join an exciting line-up of over 55 licenced cars
• New event type – Time Trial! Race against yourself, your friends and the world for the top leaderboard position
• Bonus R$ – Get an R$ boost for the first race of each day, earn bigger bonuses for consecutive days of play
• Clean Race Bonus – Drive cleanly and fairly to receive R$ bonuses
• New progression system – Unlock cars and events as you progress through the new career
• Improved graphics – Per-pixel shadowing on high-end devices!
• 180+ new events!