With Apple preparing to show off an updated lineup of iPads on Thursday, designer Martin Hajek has asked the question “What if the new iPad’s were to borrow the design language from the iPhone6/6+?” on his site. As he has done in the past, Hajek has mocked up some remarkable 3D renderings of how the theoretical Apple devices could appear.

While the new iPads this year are expected to largely appear unchanged physically, the iPhone 6-style iPads in Hajek’s renderings adopt the protruding camera lens, flash, and antenna bands as well as the completely curved edges from the latest iPhones. END_OF_DOCUMENT_TOKEN_TO_BE_REPLACED

3D renders of next iPhone parts good enough to fool many

The 3D renders above, which were posted by Flickr user Martin uit Utrecht, are modeled in Rhinoceros 3D. They were deemed good enough that numerous websites published them, assuming they were real shots of the next-generation iPhone. As noted by the poster, the renderings are based on leaked photos and video of what most believe to be the next-generation iPhone’s metal back. The models also have other elements present in the leaked casings, including: a smaller dock connector, redesigned speaker grills, and a repositioned headphone jack.

END_OF_DOCUMENT_TOKEN_TO_BE_REPLACED

More mockups make the case for a 4-inch iPhone

We know our readers have a love/hate relationship with mockups, but we think these are worth sharing due to all the rumors of a 4-inch iPhone coming this October, It does not seem like a ton of math went into these mockups to ensure an easy transition of existing iOS apps to a larger screen iPhone, but they certainly help us picture what a 4-inch iPhone could look like.

The first three images above come from 9to5Mac reader and design student Daniel Bautista. Like our own 4-inch iPhone mockup, these were inspired by Photo Stream leaks from last summer. The image on the far-right above (and the image below) is another mockup from apfelpage.de that shows a slimmed down next-gen iPhone with a touch-sensitive home button running a widget-enabled iOS 6. 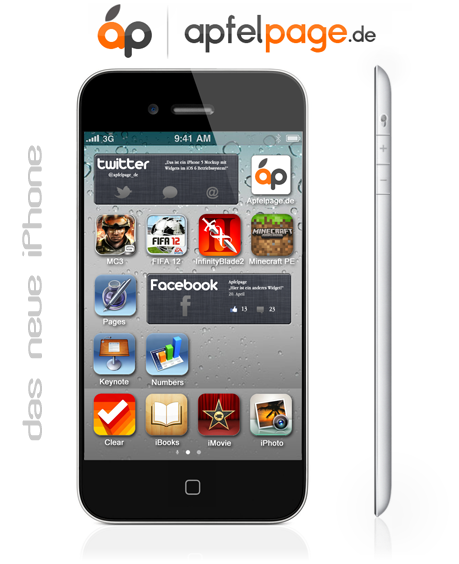