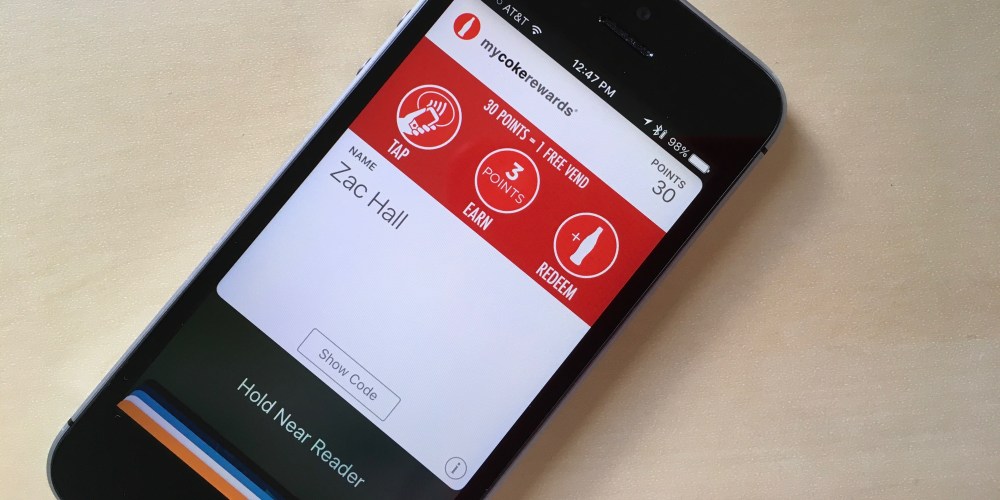 Last year Apple rebranded its Passbook app as Wallet and boosted Apple Pay by adding support for loyalty cards. Coca-Cola started accepting Apple Pay debit and credit cards at many of its vending machines around the same time, and now its loyalty card is catching up. Customers can add the MyCokeRewards loyalty card to Apple Pay and receive a free drink in return.

Here’s the really good news. Coca-Cola is giving MyCokeRewards customers 30 points up front just for adding the loyalty card to Wallet, which gives you a free drink right at the start, and you can use Apple Pay to earn or redeem points on iPhone 6, iPhone 6 Plus, iPhone 6s, iPhone 6s Plus, and iPhone SE on supported vending machines going forward.

Because the loyalty card works with Apple Pay, there’s no need to scan a barcode, although a fallback barcode is available just in case. Instead, the updated MyCokeRewards card lets you wave your iPhone near the vending machine card reader which picks up the right information securely using NFC. The process is just like using the Walgreens Balance Rewards loyalty card over Apple Pay then using a debit or credit card through Apple Pay to complete the checkout process.

You can sign up or log in and add MyCokeRewards to Wallet and use Apple Pay without even downloading an app at mycokerewards.com. For non-soda consumers (like myself), the free vend is good for other Coca-Cola products like Powerade and Dasani water as well. Adding loyalty cards for use with Apple Pay requires iOS 9 or later. Just keep an eye out for Apple Pay-ready vending machines to take advantage of the new feature (and freebie).