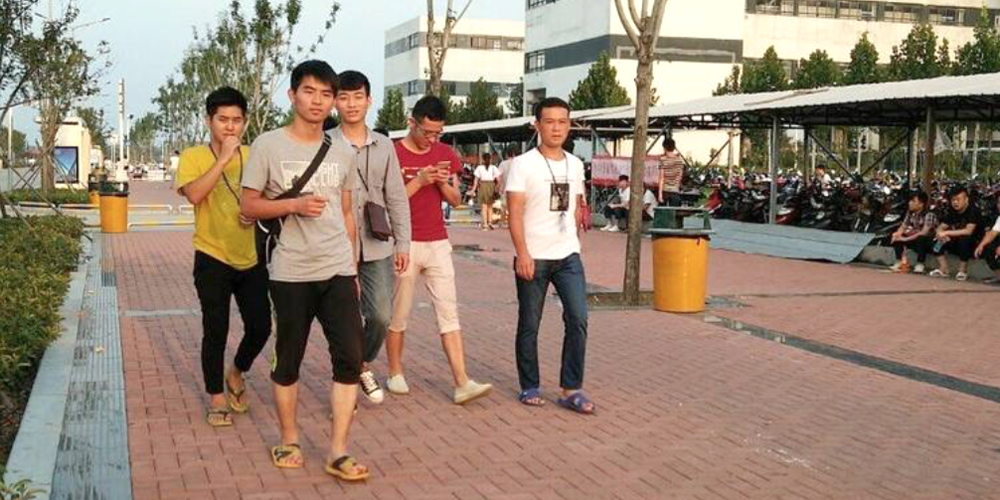 Foxconn workers outside the factory

Apple is said to be seeking more information on the deaths of two workers from Foxconn’s iPhone assembly line in Zhengzhou, China. The WSJ reports that one death was an apparent suicide, the other an accident.

Early one day last week, a 31-year-old man finished his night shift on an iPhone assembly line, climbed to the top floor of Foxconn Technology Group’s L03 production building and leapt to his death. He had been on the job for a month.

The next day, Aug. 19, another Foxconn worker was struck by a train and killed. Driving rain had flooded pedestrian underpasses, and she had scaled a fence to cross the railway tracks in an attempt to get to work.

Apple issued a brief statement stating that it would be investigating the deaths.

We constantly monitor working conditions to ensure that they meet our strict standards, and we will investigate the incidents in Zhengzhou […]

Facilities in Zhengzhou and throughout our supply chain offer employee assistance programs, designed in conjunction with Apple and available to every worker, to provide access to social services and counselors whenever needed.

More than a dozen Foxconn workers interviewed by the WSJ have expressed concern at apparent changes to overtime policies, stating that these create real hardship for workers.

In years past, these workers said, Foxconn would make liberal use of overtime to ensure that assembly lines were fully staffed. But they say Foxconn has now shifted tactics in some units, and is allowing only workers who can recruit another worker to be eligible for overtime. They say this creates hardships for those who can’t find recruits, as without overtime wages are barely enough to live on […]

Without overtime pay, Foxconn assembly line workers take home around 1,400 yuan ($211) a month after deductions for expenses including food and housing, workers said. Overtime hours can double that, but even then pay is less than the 5,000 yuan or more that they earned a few years ago during the iPhone’s boom, they say.

Workers have even resorted to paying strangers to take a temporary job at Foxconn in order to qualify for overtime, says the piece.

Foxconn recently reported a 31% drop in its Q2 net profit, a hit being attributed to the recent decline in iPhone sales. The WSJ said that Apple had not responded to a request for comment at the time of writing.